HomeCars Infographics2023 Hyundai Kona N: It is All Show, And Still The Same 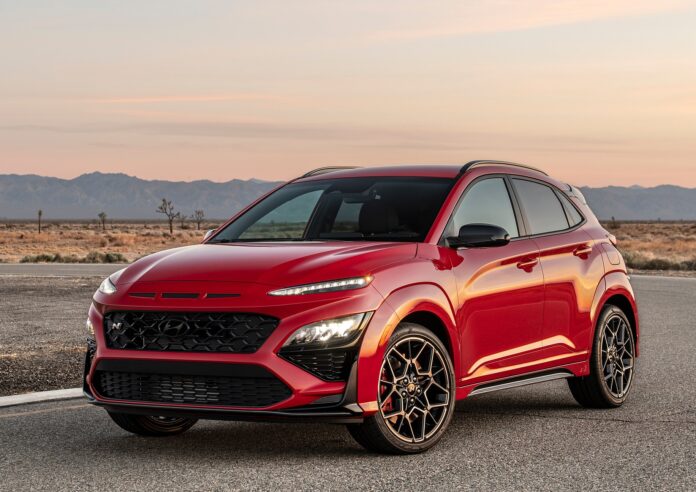 2023 Hyundai Kona N is the most unrestrained entrant in the subcompact crossover class. With its ordnance of performance details, such as an active exhaust, adjustable dampers, summer performance tires, N Sports seats, and an eight-speed dual-clutch automatic transmission. This Kona kicks off where the discontinued Veloster N hatchback is left. Every Kona N sports the Veloster N’s 276-hp turbocharged inline-four with an overboost feature, that temporarily pumps an additional 10 horsepower to the front wheels. The performance-oriented Kona comes with FWD only, just as the Veloster N did. Equipment options are limited to three paint choices. Along with standard big wheels, the largest infotainment screen, and a black cloth interior. On testing acceleration, the Kona N jumped to 60 mph in just 4.8 seconds, making it the quickest in a segment over 20 others. It is just as quick as the 306-hp Honda Civic Type R hot-hatch.

After the Kona N’s launch in 2022, the carmaker leaves its hot crossover mostly unchanged for 2023. The only minor equipment revision this year is the capability of OTA updates for the Kona N’s map and navigation system. Also, the interior sports contrast stitching, mode buttons, and shifter knob, the N brand’s signature color—Performance Blue. This adds some much-needed brightness to the all-dark interior

Behind the Kona N’s aggressive look, there sits a turbocharged 2.0-liter four-pot, the same as the one that powered the Veloster N. In basic situations, it pumps out 276 hp. But pressing a red button on the steering wheel adds up an additional 10 ponies for a 20-second burst. Unfortunately, the crossover doesn’t offer the Veloster N’s manual gearbox. An eight-speed dual-clutch automatic controls the shifting job and routes torque to the front wheels only. On testing, the Kona had a blast maneuvering into corners and engaging the over-boost function. However, the steering could be a bit accurate, but still, it provides an appreciable level of feedback. Also, it would have been better if the Kona N had more sound insulation, as a fair amount of road noise plagues the cabin at highway speeds.

The Kona N has significant EPA estimates as it can deliver 20 mpg city and 27 mpg highway, which is quite less efficient than the regular. While, on real-world testing, the Kona N returned an impressive 32 mpg result.

The digital gauge cluster of 10.3 inches looks adequately modern, but it will hardly need any glance, given there’s a HUD to show drive details. As this Kona N is performance-oriented, the 10.3-inch infotainment screen will present racetrack-minded Kona N owners—all five of them. With track maps and lap-monitoring information on request.

Equipping or optioning a Kona N is as easy as choosing between three paint colors. As it is available in only fully-loaded single-trim, the Kona N comes standard with 19-inch wheels sporting Pirelli P-Zero performance summer tires. It also has a 10.25-inch infotainment touchscreen.