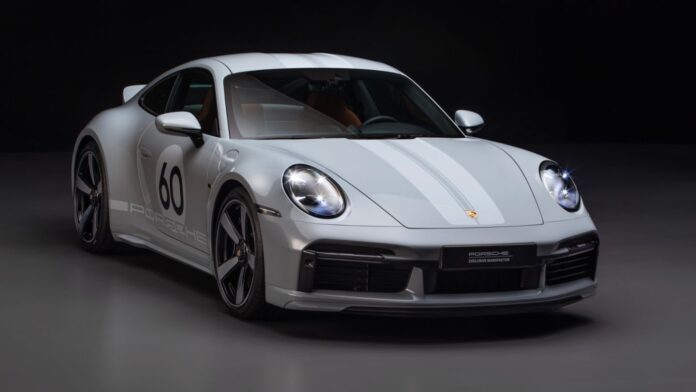 The 2023 Porsche 911 Sport Classic isn’t merely classic thanks to a new ducktail spoiler and some graphics on the car. Inside, there are three pedals, with a satisfying stick shift in the center console. There’s no automatic option. There’s no all-wheel-drive option. And the driver has 543 horsepower to handle, making it the most powerful manual-transmission Porsche car in the lineup.

The new 911 Sport Classic is an analog supercar in the digital world. You might also call it a 911 Turbo S with a manual because the Sport Classic is based on that car with a wider stance. It has the same 3.7-liter twin-turbocharged flat-six engine, albeit detuned. Power goes exclusively to the rear wheels, and you also get ceramic brakes, dynamic chassis control, rear-axle steering, and the active suspension management system all standard.

Incorporating the flared backside of the Turbo S into the Sport Classic was important for Porsche to give the car a vintage, widebody look. The ducktail spoiler adds significantly to the classic design, paying tribute to the much-loved 911 Carrera RS from the 1970s. The double-bubble roof is a callback to the 997-era Sport Classic. Porsche badging both outside and inside recalls some of the company’s earlier designs. It’s unthinkable to miss the modern interpretation of classic Fuchs wheels, pumped up on the Sport Classic to 20 inches in front, 21 inches at the back.

The 911 Sport Classic includes many less obvious design features you won’t find on other models. The aforementioned roof is among them, made from carbon fiber reinforced plastic. The hood is also CFRP. The fixed front lip spoiler and black LED-Matrix headlights are Sport Classic exclusives. Over-the-top striping most decidedly is a Sport Classic feature, as are the roundels with numbers on the doors. Buyers can choose any number between 1 and 99, but they can be removed.

Porsche Exclusive Manufaktur Director Boris Apenbrink explained that detuning the engine meant less air was needed. Engineers also reworked other air channels to further compensate for the missing vents, including ducts beneath the ducktail spoiler. The interior is also upgraded for the special edition 911. 918 Spyder was the first car to use Semi-aniline leather. The analog tachometer is retro-styled. It’s also still a four-seater, as they aim for the 911 Sport Classic isn’t to be a hardcore track machine but a thoroughly enjoyable driver’s car.

And for the first time, drivers in the United States will have the chance to sample the 911 Sport Classic. 1,250 are planned for global production.  It will be available in four colors, including Black, Agate Grey Metalli. Gentian Blue Metallic, and Sport Grey Metallic – a shade made specifically for the Sport Classic. Buyers will be eligible to get a special Sport Classic-themed watch. Though pricing for that or the car isn’t available just yet.