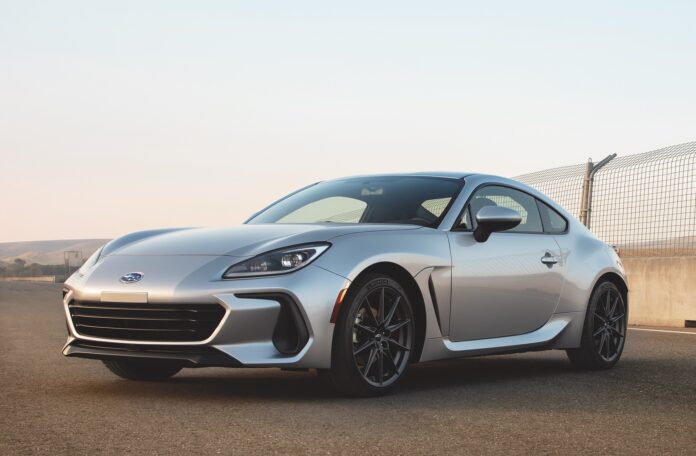 2023 Subaru BRZ sports car is one of today’s most exciting affordable automobiles. Similarly to the Toyota GR86, which is the mechanical twin that emphasizes fun driving. It is small, light, and nimble. Some ingredients like clear steering feedback, standard six-speed manual transmission, and a low seating position cooks up the entertainment. It’s the taste of a well-honed compact rear-drive coupe. The BRZ is powered by the brand’s 2.4-Liter, 228-hp flat-four engine. Which has plenty of power to move. Inside, the BRZ excellently mates with the manual transmission with confident, low-effort shifter. Also, the BRZ is surprisingly practical, with plenty of useful interior storage cubbies and a rear jump seat. Similar to the one in the Porsche 911; which is capable of hauling small fry or bags of groceries. If the rear seat is folded, there would even be enough room to fit a second set of sticky tires.

There aren’t many changes for the 2023 Model year. Inside, the BRZ uses a driver-centric design and 2+2 configuration. The cabin features a sporty aesthetic with modern technology. Facing the driver is a 7.0-inch fully digital gauge cluster which makes the tachometer the main attraction. With circular readout even switching to a linear graph in the Track drive mode. The front seats are heavily bolstered keeping passengers securely in place during hard cornering, and they are covered with red accents to promote the coupe’s racy intentions.

Under the hood lies a naturally aspirated 2.4-Liter flat-four-cylinder engine with 228 horsepower and 184 pound-feet of torque. Power is delivered to the rear wheels via a six-speed manual or an optional six-speed automatic transmission. The 2.4-Liter is more responsive than the previous model’s 2.0-liter, even though it is not quick enough. But it does improve acceleration times. The manual BRZ Limited hits to 60 mph in just 5.4 seconds and touches the quarter-mile in 13.9 seconds. Upon testing, it revealed that it has tons of steering feedback, accurate cornering composure, and the ability to fish-tailing completely. The ride quality is on the firmer side, contributing to the car’s playfulness and fun. Every model is equipped with a limited-slip rear differential as standard. The Premium model floats on a set of 17-inch wheels while the higher-performance Limited sports 18-inches.

Every BRZ houses an 8.0-inch touchscreen mounted in the center of the dashboard which acts as a hub for its infotainment system. Fortunately, the display doesn’t rely on touch inputs solely, with physical knobs for volume and several hard buttons. The system comes standard with Apple CarPlay, Android Auto, and access to SiriusXM satellite radio.

Subaru offers the 2023 BRZ in two trims. We would recommend springing for the Limited, as it adds desirable features such as 18-inch aluminum wheels, summer tires, and blind-spot monitoring. A six-speed manual is standard, which is the best suited for Subaru’s sports car, but those who prefer an automatic can get one for $1500.