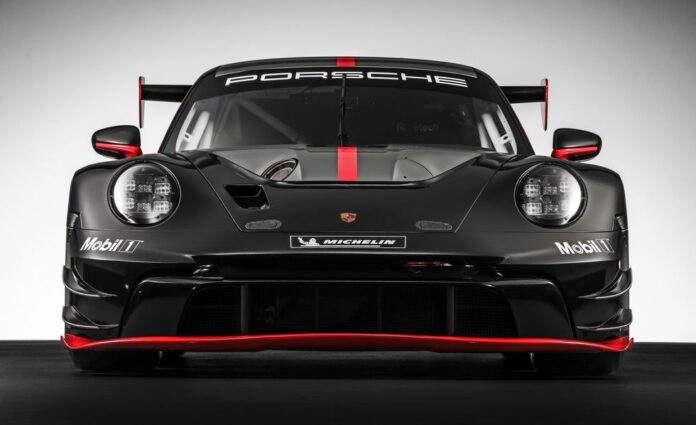 Porsche 911 GT3 R race car is based on an enlarged version of the road car’s water-cooled flat-six engine. While gaining extreme aerodynamics with the rear wing and powerful diffuser. In two top endurance racing categories, the FIA World Endurance Championship and the IMSA SportsCar Championship; a system “balance of performance” limits cars’ abilities. This is to preserve equality and prevent one from dominating. Instead of just driving with sheer speed, the new 911 GT3 R is developed with reliability and drivability in mind. (Via: Car and Driver)

The 911 GT3 R is based on the current 992-gen 911 platform, but with an extended wheelbase of 1.9 inches. The aluminum-steel composite frame is covered entirely in carbon-fiber body panels. The engine is a naturally aspirated, water-cooled flat-six engine enlarged from 4.0L to 4.2L, pumping out 565 hp. The engine is still rear mounted but Porsche leaned it forward by 5.5 degrees, hence making more space for the rear diffuser. Transmission is a sequential six-speed borrowed from the GT3 Cup car and modified for use in the GT3 R.

This Porsche uses an unequal-length control arm suspension design for the front and a multi-link rear suspension, with 5-settings adjustable KW shock absorbers that have five settings. The brand says the suspension decreases degradation of the rear tires, which allows racers to drive longer maintaining performance. The wheelbase also boosts tire longevity and consistency of grip over extensive periods on track. The brakes are six-piston, 15.4-inch front steel discs, and four-piston, 14.6-inch rear discs, clamped onto aluminum monobloc calipers.

For the race, aerodynamics play a major role on the GT3 R. The front was rearranged to create an elevated underbody section while tweaking the flat under tray and rear diffuser to produce downforce. The huge rear wing contributes to creating negative lift while adopting a swan-neck mount, improving aerodynamic efficiency. Inside, the driver’s seat now sits more toward the center of the vehicle, and a new six-point harness with new clasps. This allows for quick driver changes during pit stops.

The GT3 R will run the track in 2023 in IMSA and compete in the World Endurance Championship. Which includes the 24 Hours of Le Mans, starting in 2024 when GT3 cars replace the current GTE sports-car class. However, this Porsche’s 911 race car isn’t cheap, with the GT3 R costing $567,210.