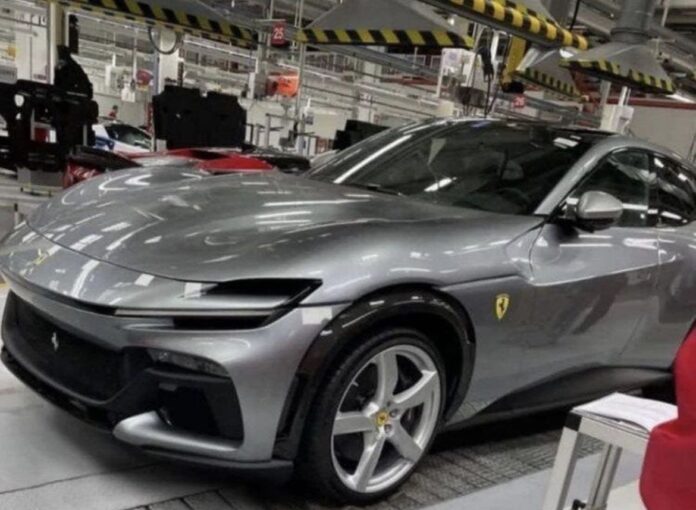 With the fresh new insights and the pictures circulating on the internet, we came across some pictures that surely seem like the upcoming SUV from Ferrari. Which is named as Purosangue.

And what would you think happened next. As soon these pictures came across the internet, it took the industry by storm and provoked a debate across the industry with allegedly Ferrari’s first ever SUV in the history of it’s making and developing cars.

We can see some images of the upcoming Ferrari Purosangue from a manufacturing plant floor. Where we can have a look at its body styling from front and back and we can see inside of what’s it’s proportions would be like from what we call as spy images.

Since the industry heard the infamous supercar manufacturer Ferrari would be making a SUV the news shook the world and it was even more so when they saw the upcoming SUVs leaked spy images from a manufacturing plant.

Since the pictures aren’t clear, because what more can you expect from a first time leaked image we’re sure that it’s happening and that, that the Purosangue’s design from front and rear looks quite similar to the Ferrari’s current SF90 Stradale supercar with a scooped up hood with the aerodynamic stream lines reaching all the way upto the rear with the razor sharp looks on both front and the rear and a muscular depth which makes it a feel and eye of a SUV.

The shape and size of the Purosangue is quite coherent from all the sides which is obvious as the carmaker is popular for making one of the best looking car designs in the world.

Apart from it’s looks and coming towards the heart of the Purosangue, gives us the assurity that it’ll come onboard with a V8 engine combined with an elector hybrid setup, or a V6 hybrid setup and the best of the best driving pleasure that you can get out off, as it will be a Ferrari what less would you expect.

But until the car hits production which is likely to hit later this year and make the official debut, we’ll update the list after when it does.