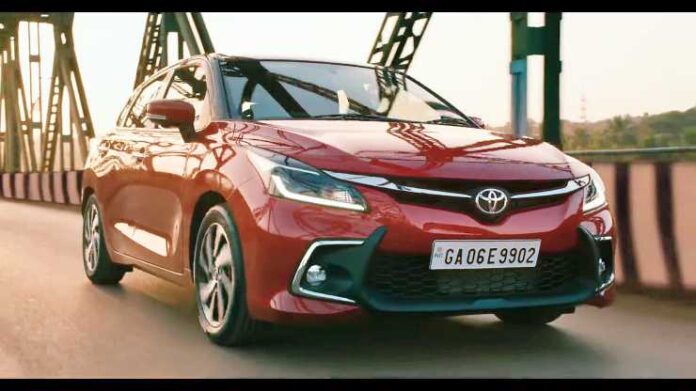 The new 2022 Toyota Glanza has been unveiled days after the unveiling of the new-generation Maruti Suzuki Baleno. The new Glanza looks sportier different although it is built on the same platform as the old edition.

The new Glanza has a completely different appearance in comparison to the Baleno. With redesigned wider grille, making it look Toyota-like.

The wider grille gets a chrome accent in the centre, with C-shaped chrome inserts and a wide air intake the bumper looks angular. The swept-up headlights come with LED DRLs making it unique to Toyota, while the bonnet gets muscular curves for a sportier look. At the rear end, the Glanza gets split taillamps making its profile similar to Baleno. Toyota also added a new set of 16-inch alloy wheels.

Inside the cabin, the new Glanza is similar to that of Baleno, with minor tweaks and similar features. A new bigger and more advanced 9-inch SmartPlay Pro Plus infotainment system that offers Apple CarPlay and Android Auto compatibility, and also gets over 40 connected car features. Along with the Alexa assistance, a head-up display (HUD), Arkamys tuned sound system, a 360-degree view camera, rear AC vents has also been added.

The new Glanza has a fuel efficiency of 22.3 km/l with manual transmission and 22.9 km/l with the AMT transmission, making it slightly lower than Baleno. Toyota is offering a warranty of 3 years/100,000 km with the option to opt for an extended warranty of up to 5 years/220,000 km. The company has four trim levels and seven variants making its price start from 6.39 Lakhs.