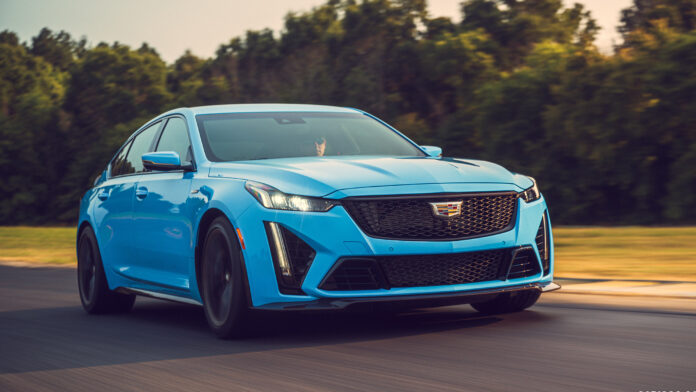 2023 Cadillac CT5-V Blackwing is a lust-worthy vehicle, offering both decadent luxury and world-beating performance specs. The car includes a supercharged V-8 engine which pumps out a stout 668 horsepower and is paired with a six-speed manual transmission. The car also comes with a 10-speed automatic transmission. The Cadillac comes with the same 10.0-inch touchscreen display and CUE infotainment interface as the standard CT5. The CT5-V is laden with various options and this luxury sports sedan has goods both inside-out. Equipped with the carbon fiber package, the Blackwing sports a ton of carbon fiber elements both on the front and rear, such as the wing and diffuser. These elements give the CT5-V Blackwing a mean and aggressive appearance. This Cadillac is a strong competitor to BMW M5 and Mercedes AMG.

The CT5-V Blackwing lacks body lines, but still, its contemporary looks deliver an impressive presence. The stance of the luxury sports sedan gives a stance that it is ready to fight, as a fully blacked-out window complements it, cool and functional mesh, Perfetto ride height, as well as the V detailed wheels. The interior of the Cadillac has interestingly V badges almost everywhere. The luxury sports sedan has an extravagant white and gray interior but sadly requires high maintenance. Also, this year celebrating the 120th anniversary of the brand, Cadillac has added a 120th Anniversary Edition to the CT5-V Blackwing lineup. The model will be limited to 120 units only, and the first one has already been sold at a charity auction for $250,000. The limited-edition model features special doorsill plates and other commemorative badges attached to the exterior and interior design.

But remember, the CT5-V Blackwing features the same interior as the CT5, but with several differences revealing its more potent nature, such as its high-performance sports seats. The Blackwing is the most powerful and fastest Cadillac production model in history. It has a top track speed of more than 200 mph while the CT4-V Blackwing is the most powerful and fastest-ever Cadillac subcompact sedan. Under their hoods, the CT5-V Blackwing uses a 6.2L supercharged V-8 rated at 668 horsepower and 659 lb-ft of torque. While the evolution of the Cadillac 3.6L Twin-Turbo V-6 drives the CT4-V Blackwing, rated at 472 hp and 445 lb-ft of torque. The Cadillac with the six-speed manual hit 60 mph in just 3.6 seconds. Every V-Series Blackwing offers a standard six-speed manual gearbox or an available 10-speed paddle-shift automatic transmission.

With the optional automatic transmission equipped, the CT5-V Blackwing has an EPA fuel-economy rating of 13 mpg city and 22 mpg highway; while with the six-speed manual drops the car’s highway fuel-economy estimate to 21 mpg. The powerful V6 is thirsty for fuel and one wouldn’t be surprised if it takes a toll on your wallet.

The CT5-V Blackwing houses a 10.0-inch touchscreen display and CUE infotainment interface. This system also features a secondary rotary controller on the center console for drivers who prefer not to get handy with the screen. Wireless Apple CarPlay and Android Auto are standard, as well as a 4G LTE Wi-Fi hotspot and wireless smartphone charging.

This Cadillac is mighty in terms of performance in comparison to the M5 and the AMG, yet it has a lower price band than those two with an estimate of around $92,390. The automatic transmission is optional, yet makes the car a tad bit quicker Butt, we would recommend sticking to the manual for a more engaging ride.