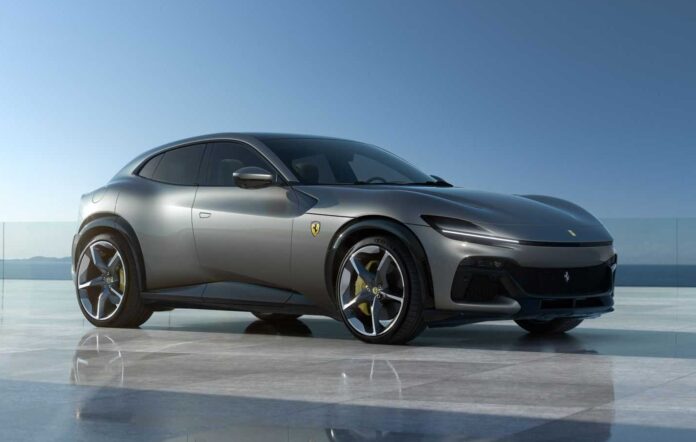 More than 75 years later, Ferrari finally made a four-door SUV that looks, and feels like a Ferrari. The company is known for making some of the most iconic cars in the world with their beautiful design and madness on road. During those years, the Italian carmaker built all types of cars packing V6, V8s even the V12s under their hood. This Ferrari is unline anything, making the Maranello-based automaker’s legacy ready for the future. The 2023 Ferrari Purosangue, the brand’s first four-door high-rider is a long-awaited entry to Maranello’s lineup. The Ferrari Utility Vehicle will hit production early next year and hit the dealerships starting late 2023.

Ferrari assured the Purosangue inherits the brand’s identity with a mighty V12 engine. The high-rider offers Ferrari’s mighty 6.5-liter naturally aspirated V12 engine that makes 715 hp and 528 lb-ft of torque. The horsepower is on par with the Lamborghini Urus, but the V12 SUV lacks torque. The car reaches peak power at 6250 rpm and peak torque at 7750 rpm making a rev machine. The SUV comes paired with an 8-speed dual-clutch automatic transmission with all-wheel drive. The Ferrari Purosangue can accelerate from 0-62 in an insane 3.3 seconds and can achieve a top speed of 193 mph.

The Purosangue can reach 124 mph of speed with its fourth gear and offers rear-wheel steering. The Italian SUV offers a side slip control system similar to other Ferraris including traction and stability control, and ABS. Ferrari has taken care that their SUV offers the best-in-class driving and performance. The new suspension system is one of the most important components making sure it meets Ferrari’s strict handling standards.

The Purosangue uses Multimatic active spool-valve dampers that replace anti-roll bars with an electric motor at each side. The active dampers help in better body control and provide stability to the car at high speeds with ease. With a ground clearance of 7.2-inches, the new suspension lowers the car by 0.4-inches. The Purosangue is made for any kind of thrill but not off-roading as one would not dare to drive an expensive car like that. Apart from the new suspension, the SUV offers a 22-inch wheel in front and 23-inch at the rear with increased stability.

The 2023 Ferrari Purosangue features an elegant design similar to the GT4Lusso ad the Ferrari FF with a long hood. The elongated hood and the long nose add character to the high-rider and gives it a beautiful-looking design. The curves are smooth and are designed to distinguish the upper and lower section of the car. It features a bold rear diffuser and wheel cladding with either carbon fiber or a matte black finish. The front houses the headlights that look like they are not even present there. The front houses the DRLs on the strip including turn signals with scooped-out hoods and heavy air intakes. The SUV is designed to look affluent with fancy elements that are inspired by the past and are built for the future.

The highlights are the doors that remind us of Rolls-Royce cars. The B-pillar according to Ferrari, helps with ingress and egress to the rear seats. The company says it helped them to increase the space inside the car without increasing the wheelbase. The Purosangue is a strict 4-seater with the rear seats individually placed. The car offers 17 cubic feet of cargo space with adjustable rear seats.

Ferrari refreshes the Purosangue’s interior with new 10.2-inch digital displays like other Ferraris. The company has not added any infotainment screen (you expect one would look at the screen while experiencing the driving thrill). The steering wheel features the traditional mode switches with other buttons and knobs like other Ferraris. The Interior is bred with all luxury in mind with a combination of Alcantara, leather, and carbon-fiber trims. The Purosangue offers a carbon-fiber roof as standard with an optional electrochromic glass roof with tint adjustment.

As the car will go on sale in 2023, The Maranello has ensured the Purosangue will be exclusive like every rare Ferrari. We expect the 2023 Ferrari Purosangeu to start at a price of a whopping $400,000 with only a few examples made. Good luck finding one for yourself as the current Ferrari owners have placed their orders for the car already.