HomeCars Infographics2023 Hyundai Ioniq: Far From Being The Most Interesting Hybrid

2023 Hyundai Ioniq: Far From Being The Most Interesting Hybrid 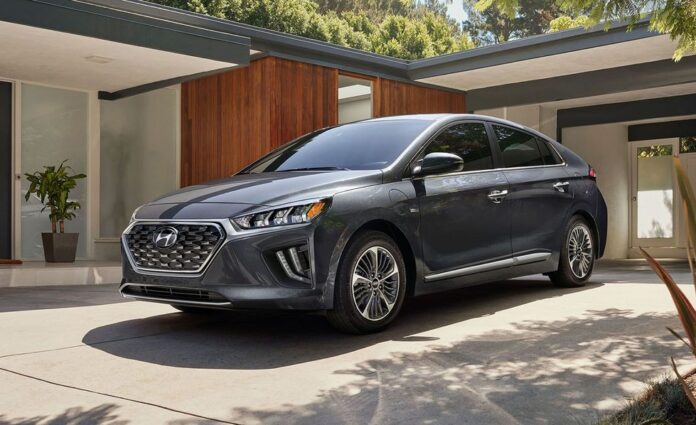 2023 Hyundai Ioniq is perfect for peeps who want a hybrid hatchback that doesn’t call eyes to itself and drives like a regular car. The hybrid’s combined EPA rating tops at 59 mpg, and the plug-in version offers 29 miles of all-electric range. Unlike the Prius, the Hyundai Ioniq looks dead traditional, and the hybrid model is far more efficient than the thirstiest version of the standard Prius hybrid. However, the Prius Prime plug-in returns better fuel efficiency than the Ioniq plug-in; though the Toyota offers only 25 miles of all-electric range. The driving behavior of both the Ioniqs is boring and lacks some refinements, but they’re comfortable and conventional enough. The interior is made from sustainable materials and a host of desirable standard features. These all make the Ioniq eco-friendly and user-friendly.

The Ioniq hybrid lineup entered the 2023 model year without any major changes whatsoever. However, the brand no longer offers an all-electric version. The company says its decision to drop the EV is primarily due to the introduction of standalone Ioniq EV models, such as the upcoming Ioniq 5.

The Ioniq hybrid on testing, isn’t really quick, as it takes 8.9 seconds to accelerate to 60 mph. Shift timing isn’t accurate in Eco mode; also, the transmission takes too long to downshift on needing acceleration. The plug-in hybrid combination of a 1.6-liter four-pot engine, electric motor, and six-speed dual-clutch automatic transmission is similar to its cousin, the Kia Niro. The Ioniq holds a grip on its own on curvy roads, responding accurately to steering inputs and maintaining a firm grip on the road. If pushed tightly in corners, the body leans, but overall the car remains stable and competent. Its composed ride and relaxed highway manners are quite surprising. All Ioniqs have steering-wheel paddles that can be used to modulate the level of regenerative braking. This allows drivers to approximate the one-pedal driving style.

The base Ioniq Blue model is the most fuel-efficient hybrid in the entire segment. The Ioniq Limited fell 2 mpg short of its EPA estimate during testing, but it’s still one of just a few cars that topped 50 mpg.

From the base model onwards, every trim comes with an 8.0-inch touchscreen infotainment system, Apple CarPlay, Android Auto, and auxiliary and USB ports. Swanky accommodations are included in an entry-level model. Top trims use a 10.3-inch screen that includes navigation. Hyundai’s touchscreen interface is easy to use too.

It would be better to avoid the additional cost and underpowered behavior of the plug-in-hybrid Ioniq, we’d recommend going with the hybrid version. As the base Blue model is the most efficient, as per the EPA, we prefer the additional features that are found on the SEL model. It sports standard 17-inch wheels, adaptive cruise control, blind-spot monitoring, LED running lights, heated front seats, rear cross-traffic alert, and a sunroof.