HomeCars Infographics2023 Mazda CX-5: The Japanese Philosophy of Being Chic

2023 Mazda CX-5: The Japanese Philosophy of Being Chic 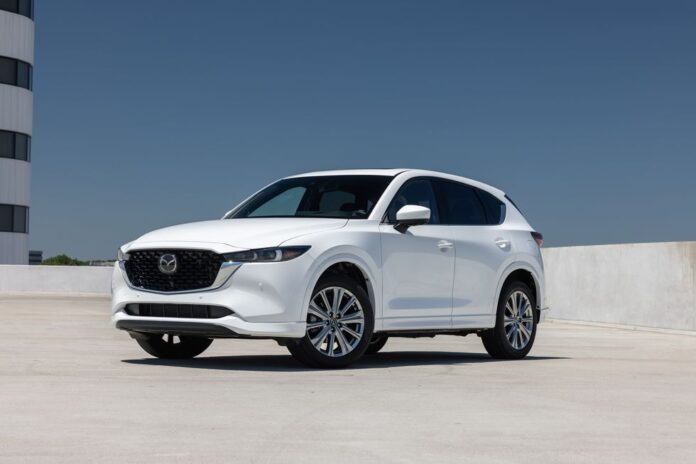 2023 Mazda CX-5 not only delivers the brand’s reputation for athletic and accurate handling but also offers a near-luxury experience for recognized money. It’s a particular mix of nimble road manners and cabin refinement that makes the CX-5 one of the favorite small SUVs. And especially top-ranging models that come with the optional 256-hp turbocharged four-pot engine. The entry-level engine is a healthy 187-hp four, with all-wheel drive being standard on all models. While the CX-5’s lithe handling will satisfy regardless of the choice of engine. The CX-5 isn’t perfect; although, that depends on who you ask. As it’s not as spacious as competitors such as the Honda CR-V or the Toyota RAV4. Few compact SUVs can match the Mazda’s panache, though, and in a segment full of pragmatic options the CX-5’s charms are alluring.

The similarly sized CX-50 joins the CX-5 in the lineup this year creating a sibling rivalry within the same maker, but Mazda says it plans on selling both models for the time being. The 2023 CX-5 has remained unchanged from last year but gains a new optional Rhodium White paint color. Whereas, the inside of the top-tier CX-5 models might make you think that it’s an Audi or a Mercedes. Premium materials and a fabulous layout make it feel especially upscale.

The standard 187-hp four-cylinder engine has great acceleration response when pulling away from stoplights or bolting around town, making it feel quicker than it is. When at higher speeds, such as passing or merging onto the freeway, it feels underpowered. The 256-hp turbocharged version provides much quicker acceleration. Both engines are mated with a snappy six-speed automatic transmission and all-wheel drive. The CX-5 doesn’t need to be driven hard to enjoy it or to appreciate its excellence. Its precise steering and composed cornering can make one helluva Sunday cruise. But it also soaks up rough roads without commotion and has the ride quality of crossovers that cost twice as much. Pavement imperfections are isolated, road noise is minimal, and the damping is neither stiff nor floaty. The electrically assisted steering provides satisfying responses.

The CX-5 has two fuel-economy ratings, for two of the engines offered. The base 2.5-Liter engine is rated at 24 mpg in the city and 30 mpg on the highway. The more powerful turbocharged engine is rated at 22 mpg city and 27 on highway. Upon testing the standard engine returned 32 mpg compared with the turbo four’s 30 mpg result.

We would recommend the Turbo trim, which best exemplifies the CX-5. The upgraded 256-hp turbocharged engine, makes its quickness better correspond along with its athletic handling. Its exterior is elegantly sporty with trim-specific gloss-black accents. Its interior mirrors that sportiness with red accents and stitching.