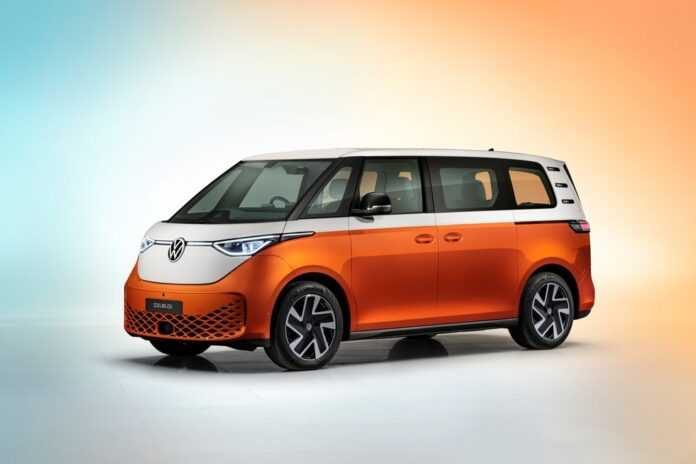 A very market segment is present that is still untouched by most automakers which is certainly the focus for this German giant with its new EV lineup. With their upcoming 2024 Volkswagen ID.Buzz, the carmaker had its eyes strapped on to focus on an untouched market. That’s correct, the nostalgic VW Bus returns in an all-new EV powertrain and all-new modern design. The new ID.Buzz features an aesthetically pleasing exterior and a minimalistic but spacious cabin that a modern-day buyer would love. Paired with an all-electric powertrain coming with rear and all-wheel drive and offers up to 260 miles of range. Plug your minibus for a charge and it will be juiced up from 5-80% in just 30 minutes thanks to its DC Fast charging support. The all-new upcoming ID.Buzz with all its fancy features makes up for a great family car useful for any kind of fun.

The Volkswagen ID.Buzz is an all-new electrified model that takes the past and blends with the present. The new VW ID.Buzz will go on sale in 2024 marking the return of the giant to new shores. There aren’t many details available for the public as the company has just released photos of it. We will update you when we get the official photos released after the official launch of the upcoming ID.Buzz.

The 2023 Volkswagen ID.Buzz will be built on Volkswagen’s new ModularElectric Drive (MEB) platform on which the current Audi E-Tron SUV and VW ID.4 are made. The company will make only the long-wheelbase passenger model compared to European markets which will get both passenger and commercial models. The base model will come with a rear-wheel drive single motor setup that will make 201 hp and 229 lb-ft of torque. The all-wheel drive model will offer a dual motor design that makes over 295 hp and 339 lb-ft of torque.

The mechanical specifications are similar to the ID.4 so we expect it to have similar dynamics. We expect the ID.Buzz will be able to accelerate from 0-60 mph in under 6.6 seconds and could achieve a top speed of over 112 mph. The VW ID.4 was impressive to drive and offered a comfortable drive, so we expect the new ID.Buzz would offer the same. We will update you regarding the driving performance and other things as the vehicle hit the roads.

As the 2024 ID.Buzz will share similar mechanical specifications as the ID.4, it will come with same battery capacity and similar range. The minibus will offer a 77-kWh battery that will provide an electric driving range of around 260 miles. The ID.Buzz will come equipped with DC Fast charging capability on all models as standard feature provided by the company. The car will be able to charge from 5-80% in just 30 minutes plugged-in on a fast charger.

The price of the ID.Buzz has not disclosed, we expect the car to cost around the current ID.4 SUV. The 2024 Volkswagen ID. Buzz will start at around $40,000 to rival other cars in a similar segment. As the US-spec model will get only the passenger trim, we hope for a slight bump in the price of the car. The passenger variant will come with a spacious cabin fitted with the most advanced tech features and good comfortable seats. We will update you about the price of the upcoming VW after the company reveals the official pricing.