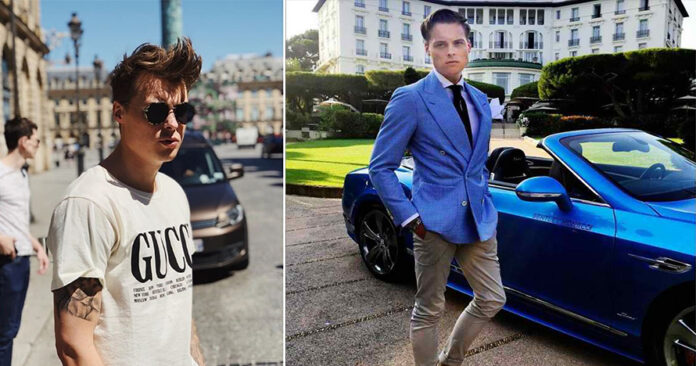 Gustav Magnar is a 29 year old Norwegian Billionaire. Gustav owns nearly half of Salmar ASA, one of the largest salmon producers in the world harvesting more than 130,000 tons Salmar annually. His stake was gifted to him in 2013 by his father Gustav Witzoe when he was just 19 years old. Gustav has an estimated net worth of $3.8 billion. While his dad manages the business, Gustav invests his time in Real Estate and Tech Startups and the Hunk is a model and a fitness freak too. Gustav loves to spend his billion dollar fortune on his Super Luxury Lifestyle and Obviously some nice set of wheels. Let’s check out what cars the billionaire drives and has in his Norwegian garage.

Starting the list with Billionaire’s Iconic Aston Martin DB6 which played a great role in the Norwegian auto history. Finished in Kopi Brown and wired wheels. The 1967 model is powered by a 4.0-litre naturally aspirated straight-6 engine paired with a 5-speed manual gearbox making 325 horses. The DB6 comes with shooting brakes, radio, power steering, power windows. Gustav’s car is reportedly on sale for $5.5 million, The DB6 was also owned by Prince Charles, Paul McCartney in the Beatles and Mick Jagger in the Rolling Stones.

Next on the list is Porsche’s 911 Turbo S powered by a 3.8-litre Twin Turbo straight-Six paired with a 7-speed automatic gearbox making 560 horsepower and it can see past 62 mph in under 2.5 seconds. The 911 turbo starts from $200,000 and costs a little more with specifications. It comes with Bose sound system and offers various comfort features.

Concluding the list with Magnar’s Porsche Macan Turbo that sits on 20″ alloys, which costs $90,000. The Macan is powered by a thrilling 3.0-litre Twin Turbo V6 making 434 horsepower and 405 lb feet of torque. The Macan is a Sporty Crossover that comes with Adaptive Seats, heated and ventilated front seats, LED headlights, panoramic sunroof, air suspension for adjustable ride quality, sport exhaust system for a wild soundtrack and Sport package for its adrenaline full drive.