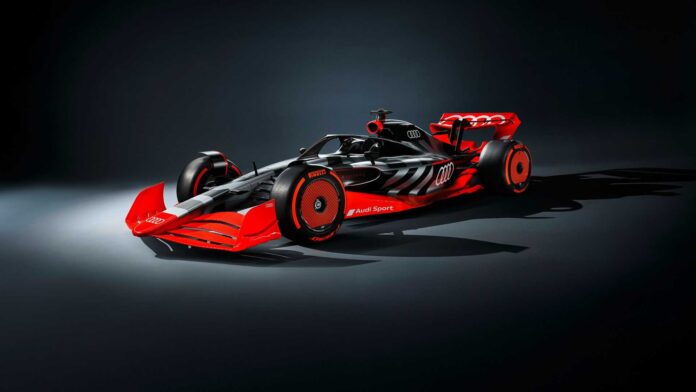 The German car maker, Audi has officially stated that Audi will enter the most fascinating Formula 1 car racing from 2026. Audi announced the news in a press conference at the F1 Belgian Grand Prix at Spa-Francorchamps. Markus Duesmann, the Board of Management chairman commented “Motorsport is an integral part of Audi’s DNA,” during the press conference. The championship’s approaching switch to sustain with newly introduced technical rules and regulations that will come into force from 2026. The strategy and plans of Audi match perfectly with Formula 1’s ultimate goal which is to become carbon-neutral by the end of 2030, this mostly drives Audi’s Formula 1 entry in 2026.

Markus Duesmann, Chairman of the Board of Management of Audi has said “Formula 1 is
both a global stage for our brand and a highly challenging development laboratory. The
combination of high performance and competition is always a driver of innovation and
technology transfer in our industry. With the new rules, now is the right time for us to get
involved. After all, Formula 1 and Audi both pursue clear sustainability goals.”

Markus Duesmann feels that this is the perfect time to introduce their Formula 1 race
car because both F1 and Audi have the same goals. By doing this Audi sees colossal marketing potential in F1 as the show is highly viewed, the event gathered around 1.5 billion viewers last year, that’s why it is one of the most hyped events in the world. The Majority of the viewers are from the United States and China which helps the car brand to grow more popular in these regions. Even Formula 1’s media presence is also rapidly growing.

The official announcement lacks information about Audi’s partner in Formula 1, according to the rumors Audi is making a deal with Sauber, a Swiss motorsport engineering company. If it is true this would give Sauber factory-level support for the first time since BMW left Formula 1 race in 2009. The official announcement on which team Audi is going to work with will be released on or before 2024 starts.