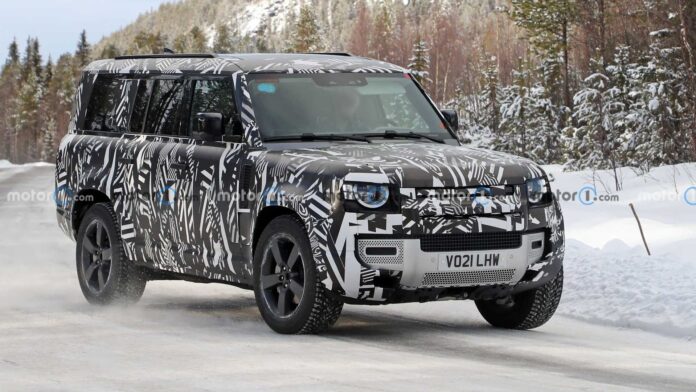 Land Rover Stretched the Defender But Wheelbase is Same As 110

It was still dressed in the trippy camouflage, The Defender 130 retains similar designs as the Defender 110 although with squares of body-colour on the C-pillars and squared-off windows, the wheelbase should be the same as the Defender 110 four-door. Based on patent from January, it appears the SUV will retain the rear-mounted spare tire and “Safari Windows” on the corners of the roof.

Expect the interior design to remain the same as well, just with the addition of two extra seats with additional air vents, lighting, and probably USB ports for those sitting at the rear, as well as more limited off-roading capability because of the longer body and quite heavy rear overhang.

There are five engines currently available in the Defender range. The diesel models are powered by a 3.0L inline-six turbo engine with a 48V mild-hybrid system, producing 395 hp of power and 570Nm of torque in the Defender D250, and 295 hp and 650Nm in the Defender D300. The range-topping P525 V8 uses a 5.0L supercharged V8 engine producing 518 hp and 625Nm. All Defender models come with 8-speed automatic transmission and AWD. Top variant Defender can go from 0-60 mph in just 4.9 seconds and have a top speed of 130 mph which is truly insane.

When it is releasing?

According to Jaguar Land Rover CFO Adrian Mardell saying that the Land Rover Defender 130 to be here roughly by August 2022.