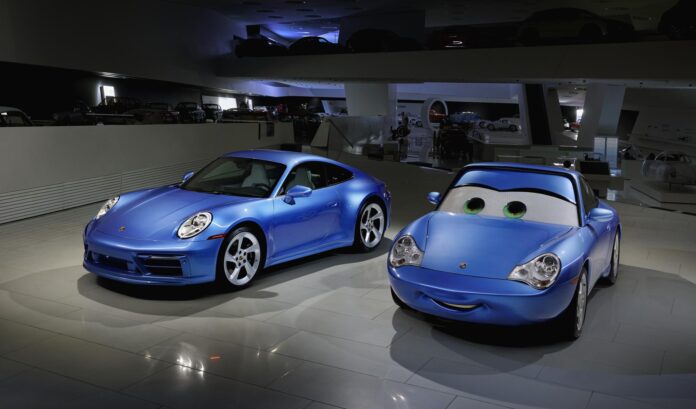 A week ago, we got the news of what may be the strangest project in the history of Sonderwunsch one off team. Its none other than a 911 GTS that is inspired by Sally Carrera, one of the character from Pixar’s “Cars” series. Now, We know the real value of a virtual car from a cartoon movie. The Sally Carrera GTS sold for a whooping $3.6 million at day before yesterday’s RM Sotheby’s auction in Monterey.

For those keeping record, that is nearly 24 times the cost of a base 911 GTS. Sally is not a basic 911 GTS. It is a collaboration of Sonderwunsch and the original design team of Sally Carrera character. The car possess unique design features. The most lucrative of them are 996-generation Turbo Twist wheels, the original Sally Carrera boasts. The paint is also original, with both the pinstripe “tattoo” decal from original one and the blue exterior-colored trim all over. Even the wheel-mounted drive select button has been replaced by one mentioned as “Kachow! mode“.

Porsche says that the sale of this benefited two charities, Girls Inc. and USA for UNHCR, the UN Refugees Agency. Thanks to the considerable interest of the parties in both one-off Porsche and the movie “Cars“, both should be receiving a significant amount of funding.