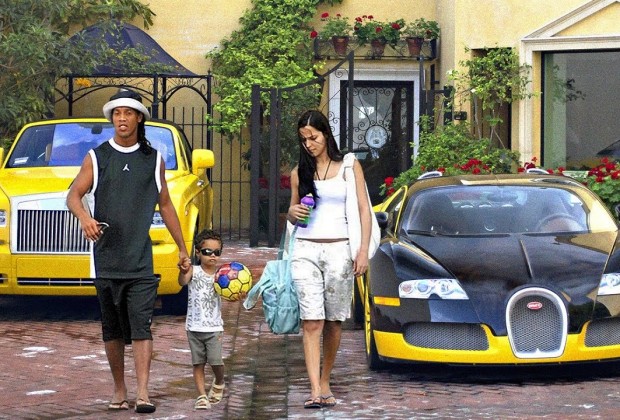 Ronaldinho Car Collection have some super amazing cars like Bugatti Veyron and much more. Ronaldo de Assis Moreira aka Ronaldinho is born on 21st March 1980in Brazil. He played as an attacking midfielder for brazil National Team. As a representing Brazil, he won Copa America in 1999 in Paraguay, FIFA Confederations Cup in Germany in 2005 and FIFA World Cup in Japan in 2002. His estimated net worth is $125 million USD. He owns some luxurious and supercars like Mercedes-Benz W212, Hummer H2, Bugatti Veyron, Audi Q7 and many more.

This luxurious German sedan is powered by a 1.8-L turbocharged petrol engine which generates 184 PS of power and 270 NM of peak torque. It can cross 0-60 MPH mark in 7.9 seconds.

This huge full-sized SUV gets 6.2-L V8 engine under the hood which produces 393 HP and it kicked down 0-60 MPH in 9.1 seconds which is acceptable for this kind of vehicle.

Ronaldinho Car Collection become super insane after adding this hyper car. Adhering to the Guinness World Record restrictions an unprecedented 431.072 km/h was reached and the Veyron was knighted as the fastest super sports-car of its time. The Veyron 16.4 Super Sport is completely sell out. It priced at $4,713,600 USD.

Ronaldinho owns an Audi Q7, under the hood it offers 3.0L V6 Turbocharged engine producing 335 HP mated to automatic transmission. This 7 seater SUV comes with AWD as standard. This SUV crosses 0-62mph in 5.9 seconds with top speed of 155mph.

This is one of the fastest three row SUV in the world. It comes with 6.5-L V8 engine which roars 360 HP and 90 lb-ft of peak torque and it mated to a 8-speed automatic transmission. It accelerates 0-60 MPH in 6.2 seconds and has top speed of 120 MPH.