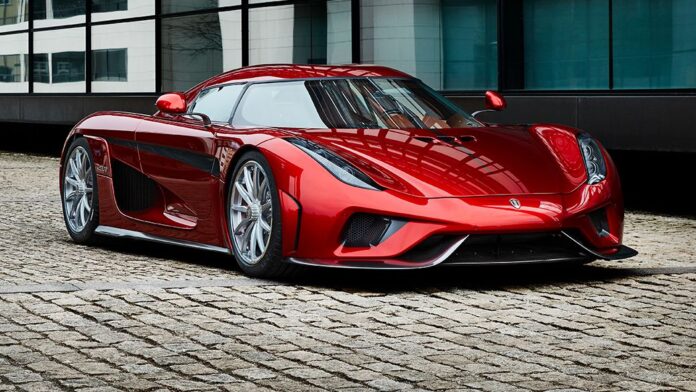 Koenigsegg, the Swedish supercar manufacturer, best known for making some of the most rare and absurdly powerful pieces of machines on the planet. One of the best engineering marvels, which are more like a collector’s piece of jewel then an everyday car. And the new Koenigsegg Regera proves all of it. With it’s cutting edge design eager to make your eye’s pleased and ridiculous amount of power delivered by its hybrid drivetrain which makes a ridiculous 1500 horsepower and a million dollar price tag will be enough to make your heads turned upside down. And this supercar is already sold out, so best of luck finding one for yourself even if you won a lottery.

The new Koenigsegg Regera which has been in production since the year 2016, doesn’t come with any changes for this year.

The new Koenigsegg Regera which just doesn’t make any sense when it comes to its power. And all that power comes from a 5.0 Litre twin-turbocharged V8 engine combined with a tri electric motor setup which makes an enormous 1500 horsepower and all that amount of power is managed by what’s called a Koenigsegg direct drive system. Yes this erotic supercar doesn’t have a transmission. And sends all that power to all it’s four wheels. And is made entirely out of carbon fibre and Kevlar, just like every Koenigsegg and thanks to that super lightweight body it can blast of from 0-60 mph like a rocket, in just 2.8 seconds and can reach upto its maximum speed of 249 mph in just 31.49 seconds which is itself a record and is just absolutely mind boggling.

And all regards to it’s super body to power ratio, it manages to keep an insane amount of body control and stability at that crazy speeds helped by its active aerodynamic components and adjustable suspension setup which and enormous down force and keep the car stick to the ground and prevent it to not make it go, “puff” from the track. And what more I say about this luxury masterpiece would be less, from its extravagant and superior looks to it’s insane power output to it’s blinding acceleration and absolutely ridiculous speeds. It’s just unmatched with another level of thrill and it’s sad that there will be only few of these ever made.

Although the Koenigsegg Regera has a hybrid powertrain it doesn’t make it a fuel efficient car. With it’s insane 1500 hp output it sucks out the fuel like water going down. But the new Regera is expected to deliver a mileage of 11 mpg combined.

With three electric motors rocking on both the axles, the Regera packs a 4.5 kWh lithium ion battery with liquid cooled technology for better thermals and more efficiency and enables an electric only range of 22 miles.

With only 80 units of these Koenigsegg Regera would ever be produced, you’re a few years late because this rare piece of machinery is already sold out with an enormous price of almost $1.9 Million so good luck finding one by yourself.