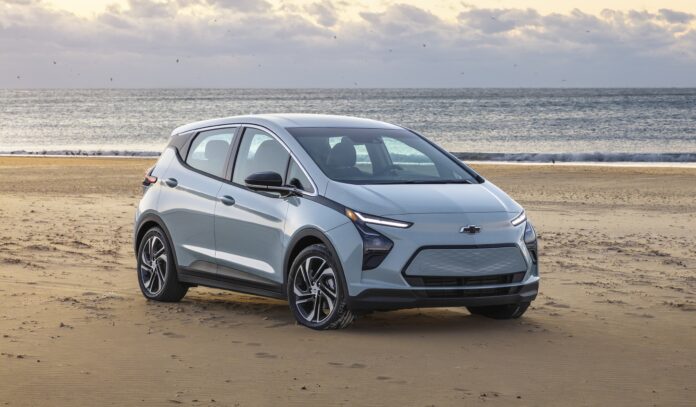 2023 Chevrolet Bolt EV is the updated version of the Bolt since its 2016 debut. The Bolt EV is slightly larger than the Bolt EUV mini-SUV and is the least expensive EV sold in the U.S. today. The EV has a surprisingly roomy interior and has nearly as much cargo space as a Chevy Equinox. Updated and affordable, the promises are yet to be fulfilled with features as high as 9 skies. Well-featured as the family-on-the-go hatchback, this may be your next ride on vacation. A new additive to the 2LT variant comes in with heated steering wheel and seats for the days of limited sunlight and also a surround-body 360-degree camera for a view of outside from the inside.

The most notable change for the 2023 Chevy Bolt is the $5900 price drop compared to the 2022 model. Also, new paint color is available called the Radiant Red Tintcoat. The EV’s cabin is now even more spruced up with a more upscale design which includes better materials than before and more soft-touch surfaces. The steering wheel has a racy flat bottom, a new 8.0-inch digital gauge cluster, and a new set of toggles and buttons for the electronic shifter. The infotainment system allows OTA updates and includes built-in apps that are compatible with Amazon Alexa and Spotify music streaming services.

The 2023 Bolt EVs, powertrain, and chassis are the same as the older models. The electric motor offers 200 hp and 360 Nm of torque delivering to the front wheels. The top speed is 93 Mph, with a 0-60 mph run time of 6.7 seconds. The EPA rating for the Bolt EV is an estimated 259 miles of range on a full charge, matching the EPA rating for the previous-gen Bolt. The charging technology includes a dual-level charging cord that plugs into both levels i.e., 120-volt and 240-volt outlets. A one-pedal-driving mode—activated via a button on the center console—increases regenerative braking to the point where you rarely need to use the brakes to slow down. The Bolt’s maximum Level 2 charging speed also increases to 11 kW, allowing the battery to fully charge in seven hours.

The 2023 Bolt EV has a city EPA rating of 120 MPGe. The last Bolt EV we evaluated achieved 102 MPGe in our real-world test, which translates to a highway range of 180 miles.

Now, Bolt EV sports a 10.2-inch touchscreen infotainment system with many standard features, such as wireless Apple CarPlay and Android Auto. A Wi-Fi hotspot (Subscription-based) and wireless smartphone charging are also available. The physical knobs complement the touch controls for volume and tuning as well as a shortcut button for the home screen.