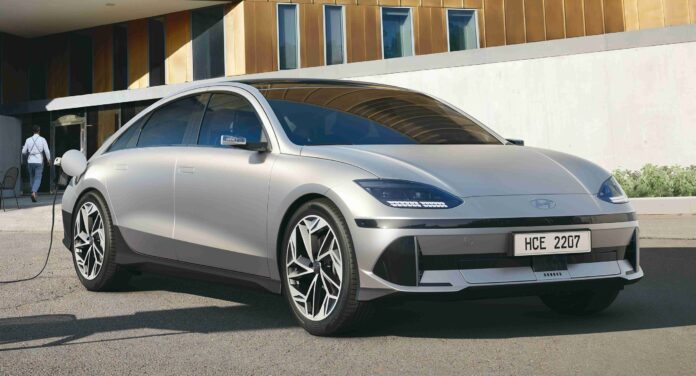 2024 Hyundai Ioniq 6 is aiming to compete with the Tesla Model 3 with this upcoming EV sedan model. This four-door will be fitting into the company’s Ioniq sub-brand, which mainly comprises electric vehicles. The Ioniq brand also shares components with the taller and minimal-looking Ioniq 5. However, this decides single- and dual-motor configs will be offered, with two battery-pack options. The larger pack, in combination with the aerodynamic chassis, can make the 6 that could deliver up to 400 miles of range. In certain configurations. Its styling is based on Hyundai’s dramatic Prophecy concept, and the Ioniq 6 looks indeed futuristic, stylish, and quick while offering a more premium interior and additional tech features compared with Hyundai’s gas-powered Sonata and Elantra sedans.

The Ioniq 6 is a new model in the lineup and will sit in between the Ioniq 5 and the upcoming Ioniq 7. This sedan has a more low-slung profile than those of taller crossovers, featuring a lounge-like comfortable interior. The initial view of the interior shows a modern and minimalist vibe, and Hyundai says that it has a flat floor to aid the feeling of spaciousness inside, along with some colorful ambient lighting.

As we guess, the Ioniq 6 will share a similar platform as the Ioniq 5, its powertrain will likely be used here. The base models will be powered by a single electric motor powering the rear wheels. And the more expensive dual-motor will provide AWD. The front and rear electric motors generate between 168 hp and 320 hp. The sedan needs to offer at least 300 miles of range to compete with the Model 3. Also, its aerodynamic shape may achieve even better ratings than its sibling. However, the Ioniq 6’s larger, the optional 77.4-kWh battery pack could even reach close to 400 miles, although an official EPA rating hasn’t been released yet. The base battery on the single motor has a smaller 55.0-kWh capacity.