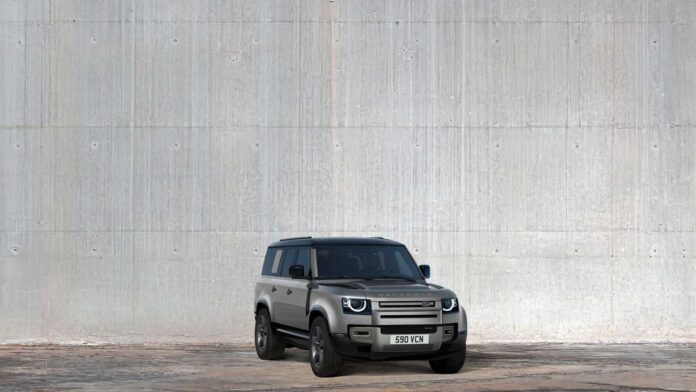 2023 Land Rover Defender 130 is now available to order in the United States. Today, in its debut we see it with seats for up to eight passengers, rich standard equipment, and two available electrified engines. Three-row Defender was spied back in August last year, in a camouflaged prototype testing on public roads. Let’s see what the British company’s lineup transition includes.

There are 5 trim levels for the Defender, which include S, SE, X-Dynamic SE, and X trim levels, as well as a First Edition model. The longest Defender with an extension of 13.38 inches at the back, is clearly visible in the extended rear overhang. This provides more room in the cabin for the third row giving the rugged SUV a 2+3+3 seating config. The cargo also benefits from the extended dimensions, which now offer up to 2,291 liters of storage with the second and third rows folded.

Land Rover says, says the third row can comfortably accommodate up to three adults with plenty of headroom available on all eight seats. Each row has its own ventilation system and an optional four-zone climate control exclusive to the Defender 130. Loading stuff into the trunk is made easier too thanks to the button in the load area which controls the SUV’s air suspension. The standard equipment of the 130 includes a 10.25-inch infotainment screen and an 11.4-inch instrument cluster display. Also on a Defender is the Cabin Air Purification Plus system. New color combinations and trim finishes are also available exclusively to the three-row Defender.

Under the hood in the United States is a range of two electrified gas engines, whereas no V8 is available currently. The P300 is the base model equipped with a 3.0L mild-hybrid turbocharged with 296 hp and 470 Nm of torque. High up is the P400 with a more powerful six-cylinder engine, offering 395 hp and 550 Nm. Every 130 comes fitted with Land Rover’s AWD system mated to an eight-speed automatic transmission by ZF. The Defender 130 can tow up to 3,720 kilograms and has a maximum payload capacity of 798 kg.

The new Defender 130 can already be ordered in the United States with a starting price of $68,000.