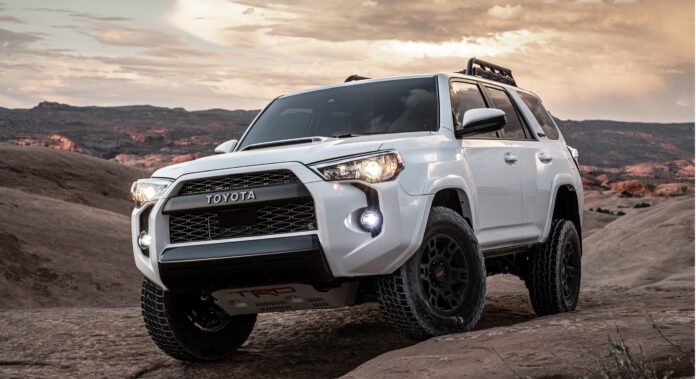 2023 Toyota 4Runner isn’t similar to what most of the other mid-size crossovers and SUVs roam around the streets. As the 4Runner is a way more old-school truck, rather than a new-age car. It sports a pickup-truck frame and boasts legitimate off-road aptitude. May the looks be modern, but its performance is still fine like an old wine. For testing its capability, it has extra underbody armor, an electronic locking rear axle, upgraded suspension components, and grippy tires. Paired with rear- or four-wheel drive, every model houses a 270-hp V6 and an automatic transmission. It is sad, that the powertrain is a relic when compared to those powering body-on-frame rivals such as the Ford Bronco and Jeep Wrangler. The Toyota’s 4.0-liter engine might be reliable, but it also quenches fuel at an alarming rate. The truck’s cabin has plenty of passenger and cargo space, while its materials are drab.

2023 is the year for Toyota to celebrate their 40 years For the 4Runner, and to celebrate, Toyota introduced a special edition. Based on the entry-level SR5 model that’s limited to 4040 units. The 4Runner 40th Anniversary Special Edition features in red, white, or black paint with tri-colored graphics. A new bronze 17-inch wheels is also part of the package. Inside, the bronze color is repeated in the stitching on the leatherette seats and shift knob. Also, a new feature for 2023 is standard blind-spot monitoring and rear cross-traffic alert. There are also name badges on the floormats, front headrests, and a couple interior badges.

Every 4Runner is powered by a 270-hp 4.0-Liter V6 mated with a five-speed automatic transmission. Available in rear-wheel drive and either full- or part-time four-wheel-drive systems. The relic powertrain has unremarkable acceleration, with the last version taking 7.7 seconds to hit 60 mph. The automatic transmission is lethargic and isn’t optimized for the engine’s behavior. And while downshifting, it often requires heavy right-foot inputs to make the 4Runner move ahead. The off-road-oriented model has notable ground clearance, and its body-on-frame construction is supported by a soft suspension. This absorbs a variety of terrain. The steering is lightweight but not accurate. If one wants to sport it around a bit, it will betray, however they’re fine for crawling along trails. Well aged though, when in action, its performance is in the right mix compared to its more modern competitors, which includes the V6 Dodge Durango.

The 4Runner’s powertrain combinations show their true colors of what age takes at a pump. Every model is lowly rated at 16 mpg in the city and 19 mpg on the highway. Whereas, the V6-powered Wrangler has much better EPA estimates of up to 19 mpg city and 24 highway.

All the 4Runner model features an 8.0-inch touchscreen infotainment system. The interface is interacted via a set of physical buttons as well as rotary volume and tuning knobs. The system comes standard with Apple CarPlay, Android Auto, and a subscription-based Wi-Fi hotspot. A built-in navigation system and a 15-speaker JBL audio system are available upgrades.

We would recommend the TRD Off-Road model. It’s not as a capable off-roader as the TRD Pro, but its lower price tag makes it a better value. Throw in the standard four-wheel drive and some TRD-specific exterior and interior bits. And it gets equipment that helps justify its name. This includes an electronically locking rear differential for maximum traction in slippery or muddy conditions.