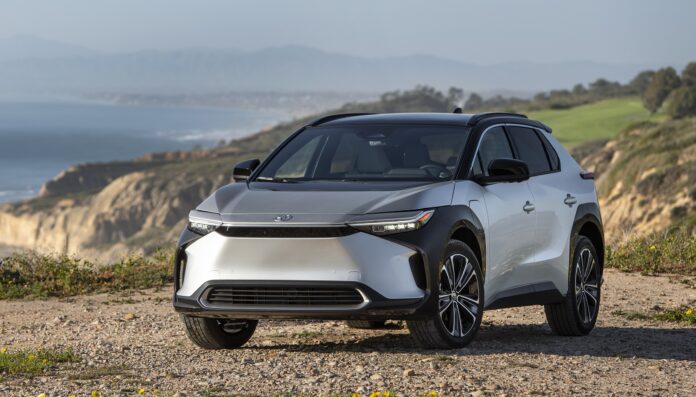 2023 Toyota bZ4X is Toyota’s ticket to re-enter the electric vehicle segment, which boasts sharp styling that sets it apart from Toyota’s gasoline-powered SUVs. Unlike the last all-electric vehicle Toyota offered, the RAV4 EV; the bZ4X is sold at Toyota dealerships nationwide. Available in both front- and all-wheel-drive models, with the former expected to deliver up to 252 miles of driving per charge. The bZ4X is a great contender for growing rivals of non-luxury EV SUVs like the Chevrolet Bolt EUV, the Ford Mustang Mach E, the Hyundai Kona Electric, the Kia Niro EV, the Tesla Model Y, and the Volkswagen ID.4. But sadly, its real-world highway range puts it at the back of the pack. The bZ4X is co-developed with Subaru Solterra, where these two models are nearly identical, although the Subaru costs more come and has standard all-wheel drive.

The bZ4X will be an all-new model and nameplate for the Toyota brand. It will arrive first in ZEV states this spring and will be available nationwide later in 2022. The interior is spacious and airy, and the dashboard is integrated with a digital gauge display and a 12.3-inch central touchscreen. Wireless smartphone mirroring, and navigation is included for three years, after which it’s available via subscription. The center console between the two front seats features standard wireless smartphone charging and open storage, removing the glovebox. In the Limited variant, there is an optional feature, where a radiant heating element in the lower dash warms front-seat riders’ legs.

As standard, front-wheel-drive, single-motor setup offers 201 horsepower. This output exactly matches the Kia Niro EV and the FWD variant of the Volkswagen ID.4. The all-wheel-drive is paired with two motors, increasing power only slightly, to 215 horsepower. Which is a lot less than the AWD ID.4 (295 horsepower) or the AWD Hyundai Ioniq 5 (320 hp). The acceleration in both the front- and all-wheel drive versions are perky but you won’t beat any Teslas in a drag race. While testing, the most powerful dual-motor version took 6.4-second to run from 0-60 mph. The bZ4X’s ride quality is not overly soft, and the steering has a decent amount of weight. Regenerative braking can be used via a button on the center console. But this is not true for one-pedal driving which is available in other EVs.

The two powertrains have nearly identical batteries; a 63.4-kWh battery pack in the single-motor and a 65.5-kWh pack in the dual-motor model. The range estimates for the FWD, single-motor are 242/252 miles (Limited/XLE), while the AWD version comes in at 222/228 miles. Toyota claims, that at a DC fast-charger, the car will gladly add 80 percent charge in just under an hour, with a peak charging rate of 150 kW.

The bZ4X is rated at a high of 131 MPGe in the city and up to 107 MPGe on the highway. Whereas, the dual-motor Limited model returned a disappointing 86 MPGe.

All bZ4X trims are equipped with with a large 12.3-inch infotainment touchscreen with wireless Apple CarPlay and Android Auto as standard. Along side a 7.0-inch digital gauge display. The system is well-connected with cloud-based navigation, on-board Wi-Fi hotspot, and wireless smartphone charging all included. A six-speaker stereo with SiriusXM satellite radio is standard. But buyers can opt for an upgraded, nine-speaker JBL stereo system.

The car is available in XLE and Limited trims, and either of them can be had with a single motor and front-wheel drive or dual motors and AWD. Upgrading to dual motors and all-wheel drive costs $2080. Equipment like a panoramic glass roof, adaptive cruise control, lane-departure warning, lane-keeping assist, blind-spot monitoring, rear cross-traffic alert, and Safe Exit Assist are all standard.

21motoring - February 5, 2023 0
More than 50 years ago when BMW started its Motorsport division, they didn't think that it would be the reason behind one of the...