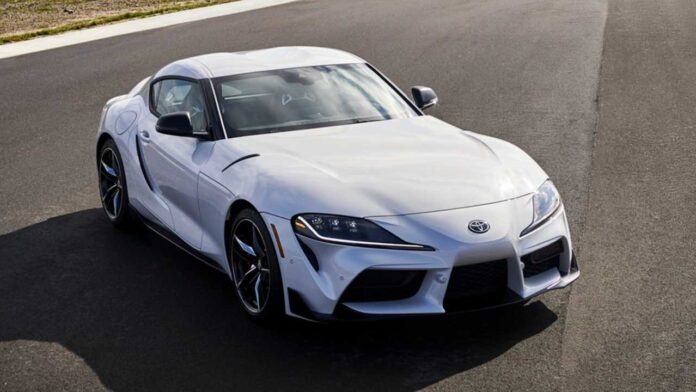 So amazing new for car enthusiast is that Toyota Supra Getting Manual Transmission. With an eight-speed automatic with paddle shifters, it’s the only gearbox you can get in a new Toyota Supra. As recently as January, a new leak states to the pile that future Supra owners might be able to row their own gears starting with the 2023 model.

Japanese outlet Creative Trend reports the GR Supra will be revealed in a six-speed manual guise on April 28, 2022, with production commencing in July and Japanese deliveries beginning in October. The three-pedal option will reportedly come with the turbocharged 3.0L inline six-cylinder engine, instead of being restricted to the turbo 2.0-litre four-cylinder. The manual Supra will be limited to the RZ-spec car in Japan, though it’s possible that it could come to other markets as well. The manual Supra will be produced in a 50-car series of Matte White Editions to honour the car’s launch, with special interiors, exclusive paint, and extra tech. Its pricing was given only in JPY, indicating this edition is likely Japan-only.

A source tipped off, a prototype manual Supra had already been shown off to dealers in Las Vegas last year.

This will give Toyota a direct rival for the upcoming Nissan Z, which will also come with a turbocharged six-cylinder engine and a six-speed manual transmission.

Being manual, the Supra will miss out on adaptive cruise control and reverse autonomous emergency braking.

The current Supra is a 3.0L turbo inline-six with 382 hp and 500 Nm of torque, rear-wheel drive, and a lightweight, balanced chassis. With rear-wheel drivetrain only. The disappoint thing is that it not comes with manual transmission. Still it is not deal breaker for the enthusiasts because it can hit 0 to 60 MPH in just 3.7 seconds and have a top speed of 155 mph with its 3.0-litre engine.

The Matte White Edition will also offer wireless charging and USB ports while demanding an extra ¥550,000 ($4,766 at current exchange rates) over the standard six-cylinder model. The six-cylinder Supra starts at $52,665 (the price includes the $1,025 destination charge).