HomeCars Infographics2024 BMW i8 M: The Next Developed i8 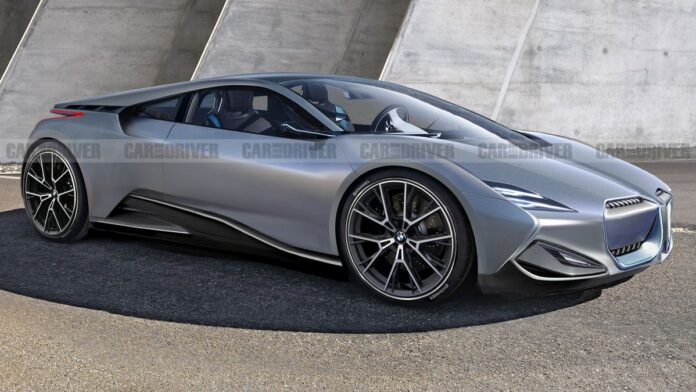 2024 BMW i8 M is here, and even though the current i8 isn’t something that lived up to the sporting intentions of BMW. When the brand had thought of sporting, that didn’t put the German luxury brand off of high-dollar hybrid sports cars. The development of the next i8 has been started, and we’re calling it the i8 M. Considering this would represent a significant performance bump over the current model. This topic gets even hotter when it is underway, and BMW’s Vision M Next concept from mid-2019 is proof of this. 2024 BMW I8 M concept, promises notable improvements over the current model. A massive increment in power, a longer all-electric driving range, updated styling, and a more capable body are expected to separate it from the model it will ultimately replace.

BMW’s next-generation hybrid sports car will be all-new for 2024 and expect to find out more as we get closer to the car’s on-sale date. The most highlighting upgrade is expected to be the powertrain upgrade. Expect the BMW i8 M concept to use the same basic setup as the ongoing i8 model. This means an all-electric motor powering the front two wheels. And a mid-mounted gasoline engine along with an electric motor powering the two rear wheels. The concept is expected to use a turbocharged four-cylinder engine, although much hasn’t been revealed yet.

As said, the i8 M’s plug-in hybrid powertrain is expected to follow the same basic setup as the ongoing i8. This means an electric motor driving the front wheels and a mid-mounted gasoline engine and an electric motor for the rear wheels. But, replacing i8’s turbocharged 1.5-liter three-cylinder gas engine, BMW has said the new car will use a turbocharged four-cylinder. The brand also claimed a total system output of gas and electric power combined of 591 horsepower, which is a huge bump in i8’s 369-hp output. This revamped powertrain will help the i8 M to compete with the likes of the Acura NSX, Lexus LC500h, and Polestar 1. The ongoing i8’s 18-mile electric driving range is a joke, to say the least. Even kids nowadays can cycle more than 25 miles. BMW said the driving range for the Vision M Next concept was a claimed to be 62 miles.

As the car doesn’t exist yet, EPA hasn’t tested this yet and there is no EPA rating releases yet, but expect improved driving range and better fuel economy ratings than the current i8.

As the car doesn’t exist, there are no dimension details released yet. Stay tuned to our page, for further information when the car finally exists.

Without any particulars or any information from the brand on how the i8 M will be equipped or what options may be available, it’s hard to recommend a particular model. Expect the i8 M to be offered in both a fixed-roof coupe body style as well as a ragtop roadster, similar to the current model’s lineup.

As the car doesn’t exist, there are no specifications released yet. Stay tuned to our page, for further information when the car finally exists.

manikjain17 - February 5, 2023 0
LaToya Jackson is an American singer, songwriter, actress, and businesswoman. She is the fifth child of the legendary Jackson family and the sister of...

Top 10 Pickup Truck For College Students To Buy In 2023

Top 10 Pickup Truck For College Students To Buy In 2023