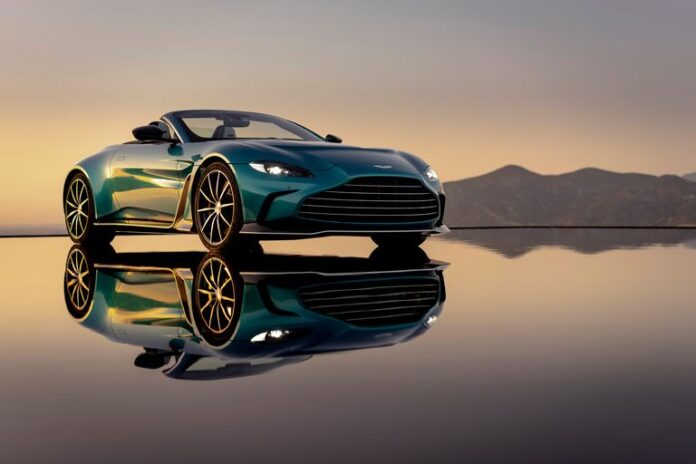 Everybody liked when Britain’s leading not-very-secret agent, James Bond driven his Aston Martin in his movies. At the time of V12 Vantage Coupe launching, there were no plans to build a roadster version. Now this one is the V12 Vantage roadster, the roadster version of the same car, one that has been unveiled at the Pebble Beach Concours d’Elegance in California.

As with the coupe, adjusting the 12-cylinder engine has been a tough task to accomplish. Aston designers says it is necessary to combine the Vantage bodyshell with the underbody structure of larger DBS. Apart from this, the body of V12 Roadster has been widened, making the vents in fenders to incorporate heat. The hood, fenders, and sill extensions are all made from carbon fiber.

The V12 Vantage Roadster is built up with same package as its coupe version. It equips with Aston’s 5.2L twin-turbocharged V10 producing 690 hp, the same motor that power DB11 and DBS. The rear axle rotates through a eight-speed automatic transmission, with a 555 lb-feet of torque. A dual exhaust, made from lightweight stainless steel sits beneath the rear diffuser. The full exhaust system claimed to weigh 16 pounds less than exhaust of V8 Vantage Roadster. We hope that it sounds better than the disappointedly sounding coupe one.

As claimed by Aston Martin, V12 Roadster will be one of the fastest front-engine roadsters in the world. Automakers estimating a top speed off 200 mph and a 60 mph time of 3.5 seconds. Those figures are just better than the one company claimed for V12 Speedster that sat on Vantage’s chassis and used the same engine.

Although it doesn’t seems as a natural track car, but will be equipped with carbon-ceramic brakes. An option of raised wing from the coupe will also offered. While images suggests that V12 roadster would look better without a spoiler. Whereas choosing it will also allow the car to produce a downforce of 475 pounds.

Only 249 units of V12 Roadster will introduced to the market making it more exclusive than the coupe version. There is no official news regarding the price tag, but Aston says it could be around the same price as that of coupe viz. $350,000. All 249 units are sold out already. That’s a huge amount for smallest Aston Martin, even in an exclusive form. But it is guaranteed that this really is the last time that Aston is combining a V12 with Vantage bodyshell.