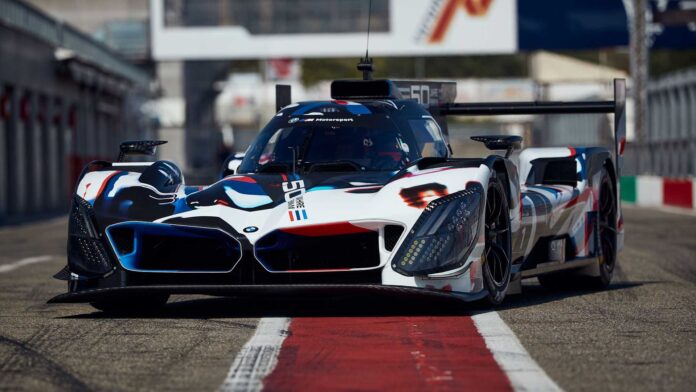 BMW M Hybrid V8 was said to be the Daytona Dominator, if you don’t know about that, read here. The M Motorsport division is returning to the World Endurance Championship, which includes the 24 Hours of Le Mans. The division will also participate in the North American IMSA WeatherTech SportsCar Championship next year. Celebrating the entry, BMW released new images of the M Hybrid V8 at Varano de Melegari. The official roll-out at Dallara’s test track was completed. But, there is still a lot of work that needs to be implemented until January 2023 before its race debut in Daytona. (Source: Motor1)

The M Hybrid V8’s “ultra-wide” kidney grille will derive the juice from a new P66/3 engine originating from DTM. This particularly was a naturally aspirated P66/1 used by the M4 DTM during the 2017-18 seasons. The 4.0L unit has been mated with a pair of turbochargers revving it up to 8,200 rpm. Simultaneously making 640 hp and 650 Nm of torque. The stake is quite big since the M Hybrid V8 is the spiritual successor of the V12 LMR, winning the Le Mans in 1999. The LMDh will face some fierce competition in endurance racing. Rivals like the Porsche 963, Acura ARX-06, and the Cadillac Grand Touring Prototype Hypercar will be competing.

The brand’s WEC commitment will come at a time when the M division celebrates 50 years of creative existence on both road and track. And so far in 2022, “the world’s most powerful letter” not only has been used for the M Hybrid V8 and M4 GT4 but also for street-legal M3 Touring and M4 CSL. Quite Late this year, a modern 3.0 CSL will be paying tribute to the homologation special from the early 1970s.