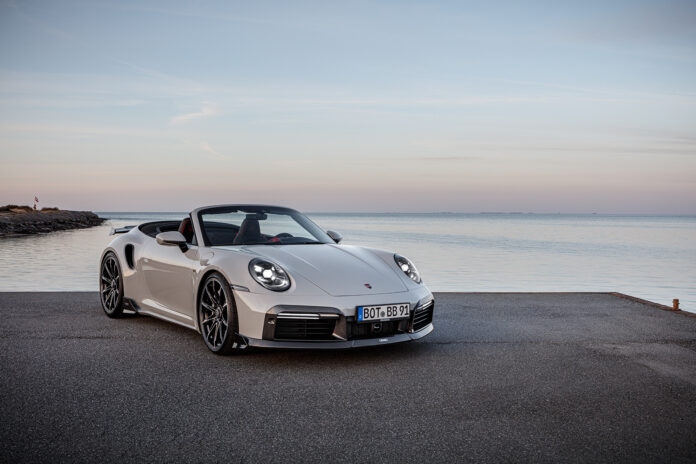 Brabus Tuned Porsche 911 Turbo S has gone too wild with the upgrades. Mostly in works with Mercedes, but now it seems like they are in works with Porsche too. All 911 owners know how powerful it is, but now with Brabus upgrades the figures just went up.

The standard 911 Turbo S has a 3.8L twin-turbo engine that produces 650 hp, with a sprint time of 0-60 mph in 2.7 seconds, making it one of the quickest cars. Brabus took this Porsche 911 Turbo S into a tuning joyride and named it Brabus 820. This new model now offers a whopping 820 hp, thanks to the tuner’s magic decreasing 0-60 mph time by 0.2 seconds. Even with a quicker top speed of 211 mph, an increase of 6 mph than the standard.

All the tuning work also includes design and aero updates, sporting a carbon fiber rear wing and front splitter. The Brabus 820 also features a ton of carbon fiber, such as the fins in front of the back wheels, around the air intakes, and on the front bumper. The stance sits on the exquisite Brabus alloy wheels, 21-inch at the front and 22-inch for the rear. Along with a new exhaust system and a height-adjustable suspension, making it drop as low as 25mm.