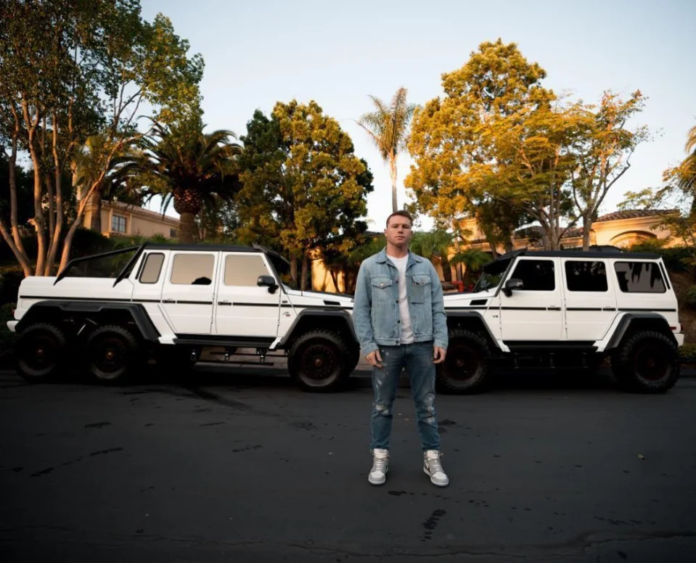 Canelo Alvarez is a Mexican Profesional Boxer. Who has won Multiple World Championship awards and has devoted almost 17 years to his Boxing career. The 32 year old has played 62 matches so far. Canelo has an estimated net worth of $140 million with his over $20 million annual income. The boxing legend loves to spend his hard earned money on Super Luxury Cars and he has a long fleet of enviable supercars from a very Rare Ferrari Testarossa to Bugatti Chiron, He’s living his life to the fullest. Let’s check out what cars Canelo drives and has in his collection.

Starting on with Alvarez’s LaFerrari which is priced at $3.5 million. The hypercar was recently added to his garage. It will be under the same roof with the Boxer’s Bugatti Chiron, Tesla Model X and Gwagons. The Laferrari has a mid-mounted 6.3-litre V12 engine combined with a electric motor which delivers a output of 950 horsepower and the car can see past 62 mph in under 3 seconds.

Canelo’s Bugatti Chiron was built in 2018 and costs $2.4 million and is finished in Atlantic Blue with French Racing Blue. In the engine way you’ll find 8.0-litre quad-turbocharged W16 and is capable of churning 1500 horses out and it can go past 62 mph in less than 2.4 seconds. Canelo’s Bugatti Chiron is reportedly on sale for $4 million and has done 1520 miles on the odometer. The reason for selling it remains best known to him.

The Boxer clearly has a thing for G-wagons and he owns a couple of them. But the main spotlight remains his Brabus 6X6 which came with a price tag of $640,000 and is powered by a 5.5litre turbo-charged V8 engine with output of 700 horsepower. G wagon is quite popular amongst celebrities. It has a lot of famous owners such Arnold Schwarzenegger, Kylie Jenner, Kevin Hart and even Cristiano Ronaldo.

The Ferrari Testarossa is regarded as one of the best Ferrari’s ever made. The car has a 4.9 litre naturally aspirated straight-12 engine which has a output of 385 horsepower. Once as a kid The Testarossa came to Canelo’s sight and ever since he always thought of owning one. He has a great emotional connection with the car and reportedly drives it less. Only 10,000 examples were made and it came with a price tag of almost $250,000.

Tesla’s new Model X has been reportedly the Boxer’s current favourite. Finished in all black and is priced at $130,000 and flexes its falcon-like doors. The Model-X comes with two standard motors which produces 670 horsepower, whereas the three motor option produces 1020 horsepower. Having a claimed drive range of 350 miles. The major rivals to the Model-X are the Audi’s E-Tron, BMW iX, Rivian R1S.