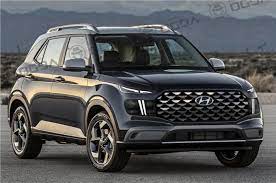 Hyundai Venue Facelift to be launched this July

Hyundai Venue Facelift coming his July. Hyundai Venue is one of India’s most popular and highest-selling compact SUVs. From the house of Hyundai, the Venue comes after Hyundai Creta in terms of sales making it most competitive among all the manufacturers.

The hype of compact SUVs is very strong in the Indian market, with huge number of sales continuously. According to some sources, the Venue facelift will launch just before the arrival of the new Maruti Suzuki Vitara Brezza.

What do the leaks say?

According to the leaked images on the internet, the facelifted Venue’s front fascia will be similar to the international-specced Tucson, including the parametric grille, integrated LED DRLs, fog lamps, and projector headlights along with the bumper, sporty bumper, skid plate, stylish alloy wheels, tall stance, decent use of chrome throughout the hull.

With roof rails, a new redesigned rear bumper,  integrated roof spoiler, and other exterior features will be included to make it as alluring as possible. This will be difficult to compete with the likes of Nexon, Sonet, and Brezza.

Also, according to some reports, a Venue N-Line might make its way to Indian shores. Venue N-Line will come with an N-Line badge on the front grille, along with red accents all over the body and in brake callipers too.