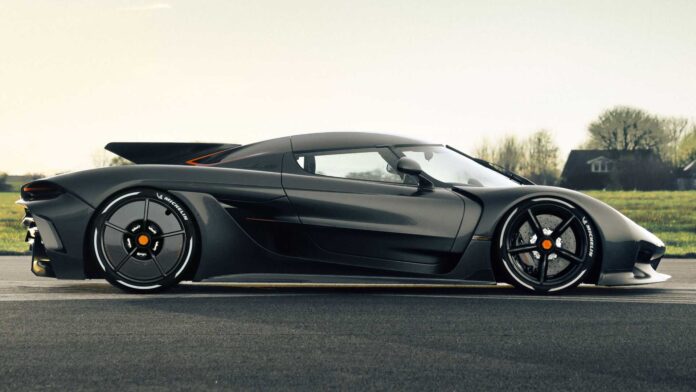 Koenigsegg has teased images of the pre-production Jesko Absolut supercar.

The Koenigsegg Jesko debuted in 2019, at the Geneva Motor Show. Followed by the speed-focused Jesko Absolut in 2020. A lot has happened after that. A horrifying global pandemic and lockdowns, worldwide semiconductor chip supply chain shortage, and a freaking war.

Recently, the Swedish carmaker released some images of its first pre-production Jesko Absolut. Abrased in the Graphite Grey paint job with orange accented striping which speaks out the aura of the car. The Koenigsegg Jesko Absolut will come with the same twin-turbocharged V8 engine and the world’s lightest crankshaft that will produce a whopping 1,600 hp. With a nine-speed automatic transmission, the Jesko Absolut can theoretically reach a top speed of a mind-boggling 330 mph and a 0-60 mph time of just 2.1 seconds. The Jesko Absolut will have a drag coefficient of just 0.278 Cd.

The reason is to make the fastest production car ever built. The Jesko Absolut will run on special E85 fuel. It has an aerodynamic carbon-fibre body, it achieves an insane top speed of 300 mph+. As the company’s founder, Christian Von Koenigsegg said that it will be the fastest Koenigsegg ever built. If the Jesko Absolut could achieve a top speed of 330 mph. It would break the average top speed record of 282.9 mph, dominated by the SSC Tuatara. And would easily break the current unofficial speed of 304 mph by the Bugatti Chiron Super Sport 300+. Bugatti is the first-ever automaker to break the 300 mph+ speed barrier.