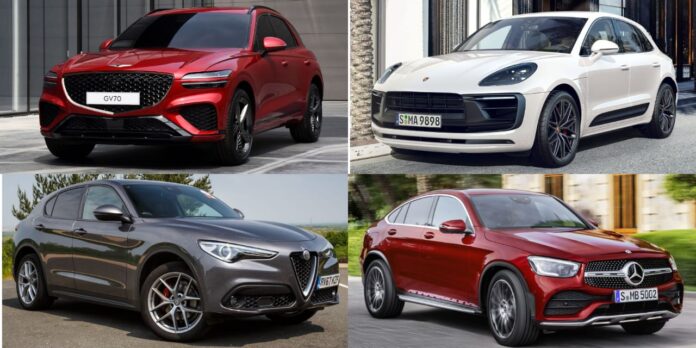 While people are not buying cars frequently as they were, the post covid situations have forced them to buy some new form of cars. And there has been a slight shift in the market too, when people are leaning forward more towards sub compact SUVs and Crossovers. So here we are, ranking the Top 10 Luxury Compact SUV and most pleasurable forcing sub compact SUVs in the market in our ranking today. So fasten your seatbelts and get ready to be amazed.

Mercedes’s best Mercedes Benz GLC Coupe with it’s sloping roofline and beautiful curvy design incorporates it’s 255 hp turbocharged inline four engine paired with a nine speed automatic transmission and grippier all wheel drive and really impressive and beautiful interiors makes it much more compelling driver to it’s squeezed styled body. But at the cost of less practicality and less cargo space of just 18 cu ft, but if you can go down that road, this sporty looking SUV with sporty driving, is the best you can get at the price of over $55,000 where you get a good 18/28 mpg fuel economy.

The BMW X4 is what the Mercedes GLC Coupe is to the GLC Class, a compromise on practicality for a much sportier looks and performance. It comes with the similar specs as the X3, a 248 hp turbocharged inline four or a 382 hp turbocharged inline six engine while the X4 M which is much more aggressive and louder makes 473 hp and the X4 M Competition which makes 503 hp.

All come paired with a swift eight speed automatic transmission and all wheel drive. And with a specially tuned chassis it offers a superior drive with comfort and stiffness as per the driver’s needs and a feature rich high tech luxury cabin and the sloping roofline which makes this X4 even more sportier but at a cargo space of just 19 cu ft. But it’s a good bargain at a base price of $52,000 for the X4 with a fuel economy of 21/28 mpg and over $74,000 for the X4 M with a fuel economy of 15/20 mpg.

And here comes the Mercedes Benz GLC Class. With a lot more practicality  and cargo space of over 24 cu ft and lavish high class feature rich interiors and a great sportier performance which comes out of it’s same 255 hp turbocharged inline four with nine speed automatic transmission and all wheel drive it’s a lot more comfortable and pleasurable ride experience and a lot more fun at a lot less price of around $45,000 with a fuel economy of 22/27 mpg.

While the X4 and the X4 M could be more sportier looking stylish SUVs but couldn’t match the practicality and cargo space of over 39 cu ft and a aggressive nature of the BMW X3 M which comes with the same heart that beats to make a crazy 473 hp with it’s twin-turbocharged inline six and a hefty 503 hp with the X3 M competition which is a hell lot more angrier. And with a performance like this compiled with a quirky 3.3 seconds 0-60 mph time with all wheel drive with a luxurious driver focused cabin with fine materials and a performance and driving thrill of a sport SUV is just what the buyers are looking for. It comes at a price of almost $71,000 with a fuel economy of 15/20 mpg.

With the stellar looks and a DNA from the Italian bloodline, the Alfa Romeo Stelvio Quadrifoglio is one of the best driving thrills you can get out of with this Italian sports SUV. It packs a 503 hp twin-turbocharged V6 engine and a rapid acceleration of 3.3 seconds from 0-60 mph. This pricey SUV is a hell of a lot of fun when you go round town or highway cruising. It is rewarding. With a price of a crazy $82,000, this SUV comes with a beautiful design and a luxurious interior inside and delivers a fuel economy of 17/23 mpg.

While many people love their German counterparts, the enthusiasts know that there aren’t many when compared to the Volvo XC60. It packs a 247 hp turbocharged inline four and a 295 hp turbo-supercharged inline four engine and a 455 hp plug-in hybrid and which all comes paired with front or all wheel drive and a smooth eight speed automatic transmission which results in a comfortable and rich driving experience with a cabin that is rich in fine materials and high tech features. It starts with a base price of over $44,000 and delivers a fuel economy of 23/20 mpg.

The Genesis GV70 which is toned down version of the three rowed GV80, with a muscular looks it packs a 300 hp turbocharged inline four and a 375 hp twin-turbocharged V6 engine which all come paired with an eight speed automatic transmission and all wheel drive which helps it to go from 0-60 mph in 4.9 seconds and is focused more on having a comfortable driving experience than a more performance focused, and that doesn’t means that it can’t, it sure does. And with a fuel economy of 22/28 mpg it starts with a price tag of around $43,000 which is justified where the competition is the mighty German cars.

In the third position comes the all time buyer’s favourite BMW X3. Which is overall a more powerful and refined car with just a smooth and comfortable ride quality. It packs a 248 hp turbocharged inline four engine or 382 hp twin-turbocharged inline six engine paired with an eight speed automatic transmission with front or all wheel drive and a 0-60 mph time of 4.8 seconds, it sure pack a lot more fluid and refined driving experience with great thrilling performance and a durable and smooth ride packed with a rich and high tech interior inside. And with a fuel economy of 21/28 mpg it starts at a base price of around $45,000.

This is no doubt one of the best luxury sports compact SUVs out there in the market. Based on the already impressive GLC Class, it comes with more power and is focused on a more driver oriented approach with the AMG badge and exhibits more on the precise steering and a lot more fun performance athleticism. It packs the 385 hp twin-turbocharged V6 with the GLC 43 and a 469 hp twin-turbocharged V8 with the GLC 63 which cannot be upgraded to a more powerful 503 hp paired with a nine speed automatic transmission and all wheel drive this car is just powerful madness on the road and really delivers on the best pleasurable and joyous driving experience that any compact SUV has to offer. It starts at a base price of $67,500 with a fuel economy of 18/25 mpg.

Here comes the top dog with literally the most exciting and thrilling driving experience of all SUVs in the market right now. And ofcourse it is a Porsche, what better can it get. It’s sportier body athletics starts with the base 261 hp turbocharged four cylinder engine, or a 375 hp twin-turbocharged V6 for the S and the of-spec GTS model which makes a hefty 434 hp. It’s fast, it’s quick with a 0-60 mph time of under 3.5 seconds, it’s bold and aggressive, it’s impressive when it comes to the ride quality and comfort.

It is a hell lot of fun when it comes to the performance which is just awesome and just impeccable when it comes to it’s precise handling which makes this Porsche Macan one of the best cars to drive currently. It comes with a base price of a sub $56,000 and delivers a fuel economy of 19/25 mpg. And is well justified to hold the top spot in the list.