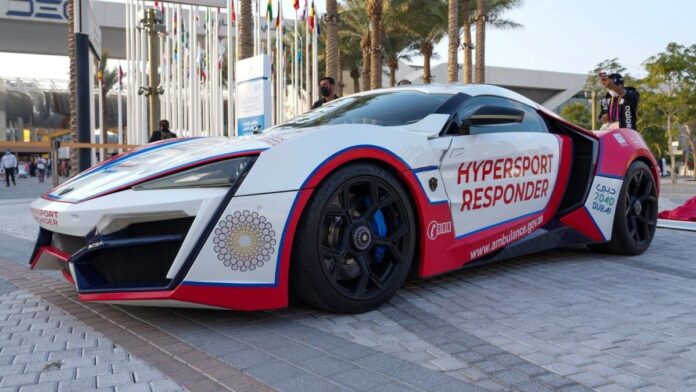 Earlier today at Dubai Expo, the Dubai Corporation of Ambulance Services or DCAS welcomed the world’s fastest and most expensive Ambulance car. That’ll be used for providing ambulance services in Dubai.

It’s called the “Hypersport Responder” which is dubbed for the Lykan Hypersport. It is a one of a kind car with only seven of these ever made.

The Lykan Hypersport, famed after making a bold appearance in the Fast and Furious Seven, is a special vehicle developed by the W Motors in Dubai. It packs a stunning and beautiful looking design with a body made entirely out of carbon fibre. Lykan is powered by a 3.7 Litre twin-turbocharged six cylinder engine which makes 700 hp and can go from 0-60 mph in just 2.8 seconds and can achieve a top speed of 245 mph.

Though it is repainted to look like an ambulance car we also think that there will be many changes in the interiors too. Following latest technical equipment onboard which serves the purpose of being the first correspondent during any medical emergency. As it will improve the time and reduce the time taken to reach from and through any emergency response.

W Motors Lykan Hypersport is a limited number production Hyper Car. With a limit of 7 Units on whole planet so you can’t decide the price now. But when W Motors launched this Lykan came with a price tag of $3.4 Million Dollars which is truly insane.

Lykan have a estimated kerb weight of 1400 KG.