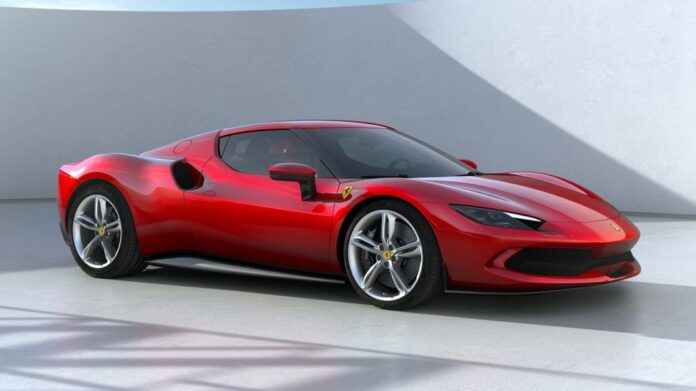 With the coming hype in the hybrid sector, many brands are moving over and adapting the new standards of choices. One such automaker is none other than the pride of Italy, Ferrari. And it’s newest Ferrari 296 GTB is an effort in that direction. With it’s turbocharged V6 with hybrid tech inside which wouldn’t make sense at one point because it is just rare with its long history in making one of the most iconic cars.

The new 296 GTB (Gran Turismo Berlinetta) makes an insane 819 horsepower which is controlled by its dual clutch automatic transmission which sends power to it’s rear wheels (yeah it’s a Ferrari what would you expect)..Matched by the Ferrari iconic design language which incorporates it’s beautiful, and stunning looks which can clearly be thought off is designed by Ferrari as well look futuristic. It’s a car with style, and fashion which can clearly smash your expectations of it just being fashionable only.

The 2022 296 GTB will be an all new car.adding to Ferrari’s lineup of plug-in hybrid cars such as the SF90 Straddle and Spyder, but a doorway for medium engined cars blended well with the hybrid system and be ready for the future.

Above it wheels of the new 296 GTB lies a 3.0 Litre twin-turbocharged V6 engine augmented with an electric motor which makes an astonishing 819 horsepower combined (888 hp with the Squalo tuning package) paired with an eight speed dual clutch automatic transmission which sends all its aggressive powered to the real wheels.

And it can blast off from 0-60 mph in an insane 2.8 seconds and can achieve a top speed of 205 mph if you decide not to step your foot up.

And this Ferrari is new but it carries the same amount of stimulation and excitement as the other V8 or V12 powered ones. With an eager to show it’s capabilities onto the roads with a pinch of over steering and fun with it’s rear wheel drive. And it’s active rear spoiler inspired from it’s much more expensive cousin, LaFerrari is a sign for more grip and more downforce and more strength to the body to go smoothly in the high speeds and twisty roads. Coming in four different models, eDrive, Hybrid, Performance and Qualify which provide the taste and energy matching the performance dynamics as per your liking but maintaining the Ferrari branding with it, everytime you drive it.

Well Ferrari’s are not known for their fuel economy figures big being a plug-in hybrid makes it earn some miles. It can go about 15 miles with electric only range and could deliver an estimated mileage of 13-16 mpg combined.

Although Ferrari hasn’t shared anything about the pricing of the new Ferrari 296 GTB, there is no wonder that it will come at a hefty six figure price and estimates say that it will probably be priced at around $250,000.