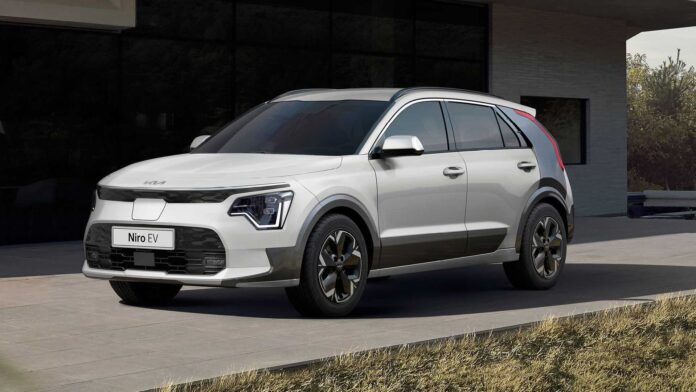 2023 Kia Niro is a completely redesigned EV, which differs hugely from the outgoing model. The changes made are to both inside and out, along with a debut scheduled soon. The last global model was launched late last year, but this time we will see it on April 13 at New York Auto Show.

With the new design changes, one would not be able to immediately recognize it as being from Kia. Although Kia didn’t imply how the US Niro would differ from the global version, we guess there would be minor tweaks. Following the HabaNiro concept, the 2023 Kia Niro gets wider than the current model. Changes include bold and contrasting rear pillars and long taillights. Toned down the front-end styling, the crossover receives unique cladding along the front sides.

The 2023 Niro will be offered with a choice of hybrid, plug-in hybrid, and EV powertrain configurations. And there would not be any major changes to the interior. Featuring Kia’s side-by-side screens on the dash and buttons for the vehicle’s most-used functions.

The current Niro hybrid sports a 139 hp 1.6L engine and electric motor setup mated with a six-speed dual-clutch automatic gearbox. Meanwhile, the EV version packs 201 hp and 255 Nm of torque launching the car to 0-60 Mph in 7.5 seconds. All that Power comes from a 64.8-kWh lithium-ion polymer battery pack. A full charge can run the EV for 287 miles on the WLTP cycle.

The pricing hasn’t been revealed yet, but don’t worry it would be revealed soon at the NY Auto Show. The sales might go on before the end of the year.