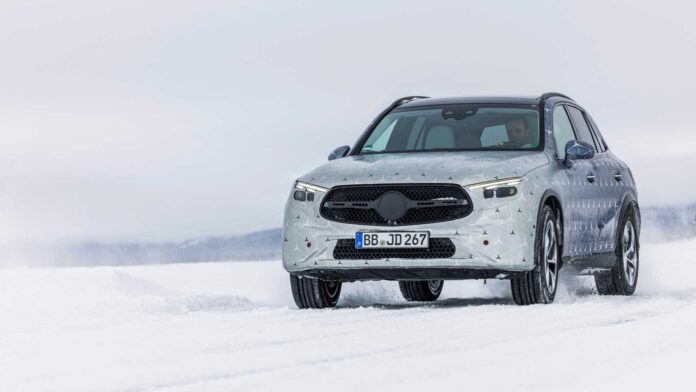 The 2023 Mercedes-Benz GLC-Class prototype was spotted. Originally, the GLC SUV rolled out as a replacement for its predecessor GLK. It became the worldwide highest selling model of Mercedes-Benz rivalling the high riding Audi Q5 and BMW X3. Breaking the sales record of C-Class Saloon with over 270,000 sales in 2021 alone.

With light camouflage, the 2023 Mercedes-Benz GLC-Class was spotted at Mercedes’ Swedish winter test facility on hard snow and ice. From the looks, Mercedes isn’t messing too much with the styling of the hot-selling model. Peter Kolb, head of overall vehicle testing for the GLC model line, said the new GLC is 60mm longer than its predecessor at 4718mm. The new GLC also backs a 15mm longer wheelbase than before.

With less legroom in the current model, improvements are likely to be made for additional legroom. Also, boot space has been increased by 15-litres to a segment-leading 600-litres.

The cabin has also been revamped with a new higher set dashboard that provides the GLC with a more SUV like feeling.

A new three-spoke steering wheel design featuring new multi-function controls with a combination of touch-sensitive pads and button-based controls including digital instruments and portrait style displays. The components and cushioning materials are of high quality even on early pre-prototype.

Equipped with an augmented reality feature in the navigation system, 360-degree camera with a live view of the ground under the front of the car.

As Mercedes-Benz is already in the path of electrifying, all engines in the new GLC line-up will be ‘hybrid’ featuring Mercedes’ second-gen starter-alternator integrated into the drivetrain giving a 22 hp boost.

For safety, Active Distance Assist Distronic can now be used at speeds up to 62 mph. Additional features like optional Trailer Maneuvering Assist can carry out cornering maneuvers up to 90 degrees.

Depending on the market, there would be changes in GLC’s engine. As in the US only 2.0L turbocharged four-cylinder gasoline engines with a mild hybrid offering 200 hp and 433 Nm of torque, with a 9-speed automatic transmission. With this, the GLC can hit 0-60 in 7.1 seconds and a top speed of 130 mph.