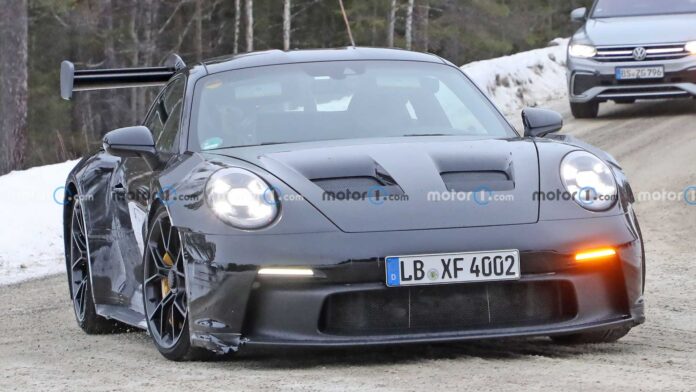 2023 Porsche 911 GT3 RS will probably be the last 911 without electrification or turbochargers, instead, it will have plenty of wing. The GT3 RS is the latest variant of the 911, which would be more hard-core than the already track-oriented GT3 and is likely to have more power. These spy shots give an idea of what its huge wing looks like.

Porsche’s 911 product strategy is quite good if you observe new, more powerful iterations follow each other in a steady, predictable order. The next one is the new RS version of the naturally aspirated GT3. The letters RS has surely been placed on the best and most extreme 911. The Rennsport name denotes the cars specially designed for regular track use. With its 50th birthday right around the corner, the first 911 to get the RS treatment, the 1973 Carrera RS, has become so popular among collectors that good examples can sell for seven figures.

As per assumptions, we think that the new car will use the existing GT3’s naturally aspirated 4.0L flat-six, with a small performance bump over that car’s 503 hp. The drivetrain will be exclusive to the rear axle, motorsport 911s aren’t loaded with the added weight and complexity of all-wheel drive. Porsche will only offer its dual-clutch automatic in the RS. Spy shots show the RS is wearing a long, swan-neck double-plane rear wing.

The huge downforce plays an excellent role in improving the regular GT3’s track performance. The new car would be a lot pricier over the GT3’s $163,750.

nykhilist - February 5, 2023 0
Throughout the years, the Japanese have mastered the art of making some of the most reliable engine designs and consistently performing cars. They have...

Top 10 Most Affordable Daily Drive Sedan To Buy In 2023