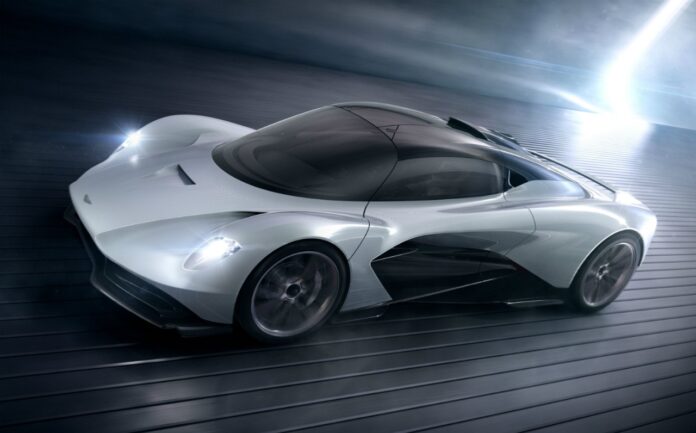 A track-ready hypercar sporting a gorgeous design and nerve-recking 937-hp of madness inside its mid-engined body defines the 2024 Aston Martin Valhalla quite well. The upcoming Valhalla will mark the brand’s odessy in the electrified era of cars with its plug-in hybrid powertrain. The upcoming plug-in hybrid Aston will be flooded with carbon fiber all over speaking about its bold appeal and aggressive road presence. It will feature a powerful V8 engine sourced from Mercedes-AMG which will produce a ming-boggling 937 horsepower. Aston’s mid-engined hypercar’s driving nature proceeds its bold appeal with an insane acceleration of 2.5 seconds and a top speed of 217 mph. The upcoming Aston Martin Valhalla will be based on the nerves of the Ferrari SF90 and will compete with future cars from a similar segment. We will update you about more specs and features when the British brand will reveal the information officially.

The 2024 Aston Martin Valhalla will be the company’s first plug-in hybrid hypercar which is set to hit the roads at the end of 2023. The Valhalla will be different from the AM-R8 003 and the 003 Concept. The Ex Mercedes-AMG CEO Tobias Moer wants the new mid-engined Aston one of the finest hypercar. The car will sport an AMG-sourced V8 engine with a hybrid powertrain and will cost less than a million dollars, unlike the previous price it came with. The Aston Martin hypercar will hit the roads in the later half of 2023.

Aston’s upcoming Vahalla will feature a powerful engine combined with a plug-in hybrid powertrain with two electric motors. At its hard, the car will come with a 4.0-liter twin-turbocharged V8 engine sourced from Mercedes-AMG. Paired with an 8-speed dual-clutch automatic transmission that powers the rear wheel of the car. The outrageous engine results in a mind-blowing 937 horsepower and 737 pound-feet of torque. The Valhalla is insanely quick with an acceleration from 0-60 mph in under 2.5 seconds and a top speed of 217 mph as one would expect from a raging hypercar. Combined with a carbon-fiber unibody design, the car is ferocious thanks to its lightweight body design.

The Aston Martin Valhalla will feature adaptive dampers and a limited-slip rear differential with a track-focused mode. Added with an adjustable suspension for an ultra-low ride and carbon-ceramic brakes, the car delivers a behemoth of performance on road. The car is a beast when it comes to its madness of power and ridiculous performance. We will update you about the real-world performance after the official reveals so stay tuned for that.

The 2024 Aston Martin Valhalla will offer an all-electric driving of over 15 miles. Judging by its powerful V8 with a hybrid powertrain, this hypercar is not your favorite fuel-efficient car. The car will deliver an estimated mileage of around 13 mpg in the city and 18 mpg on the highway.

Aston Martin will make only 999 examples of their prestigious hypercar with each costing around $800,000. Unlike the Valkyrie, the Valhalla will cost far less than its original expected price as the new CEO had made some changes to the car. Not that everybody could afford the exotic Aston’s hypercar, but we hope to see a top-down version of the car.