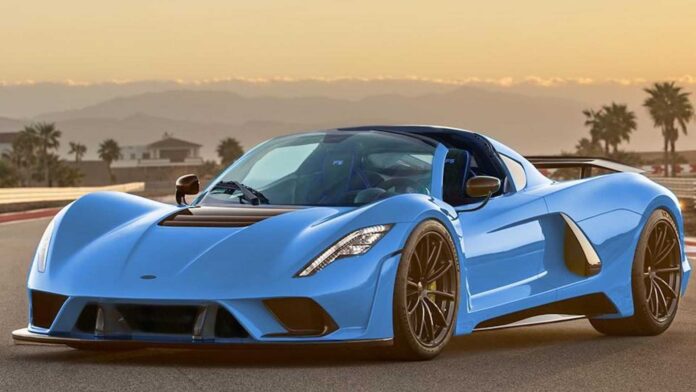 Special cars can be spotted at the special location, it is a universal fact. The Monetary Car Week is one of them, where you have the chance to see some of world’s most historic and exclusive cars. But the series of car themed events in California held for one other purpose, that of being an auto show for billionaires. A place where they can see and buy the very new, and unobtanium grade models. One-off those special car is this year’s spotted Hennessey Venom F5 Roadster, recently launched at The Quail Motorsport Gathering.

As the name suggests it is the cutoff version of the existing F5, which the French manufacturer states that is gonna be the world’s most powerful and fastest open-topped road car. But only few can cherish this hypercar as only 30 units of this will be built with each one will be selling for a whooping $3 million. By seeing the standards of hypercar unveilings, the price doesn’t feel that excessive.

The Hennessey Venom F5 roadster is packed up with the same package as that of F5 Venom Coupe. This package contains a 6.6L twin-turbocharged V8 capable to produce an overwhelming 1817 horsepower. The power is transmitted to the rear wheels through an automated single-clutch transmission. As mentioned by manufacturer, roadster has a dry weight of just 3098 pounds viz. just 45 pounds more than coupe. It is designed to achieve a top speed over 300 mph, despite the fact that maximum velocity will be limited when roof panel is removed.

The open-topped F5 is a convertible rather than a full fledged cabriolet, with a lift-out section b/w the windshield rail. The panel is easily removable as it is made from carbon fiber and weighs under 40 pounds. The roadster version also gets a new viewing window in its engine cover through which its V8 can be seen. It is attached beneath a carbon-fiber panel in the coupe.

Other visual that can be observed on F5 roadster including new look-a-like seven-spoke aluminium wheels, available in either silver or polished aluminium finish, secured by titanium bolts. The same carbon monocoque is used which means that manufacturer tried to maintain the exact same structural strength.

The only question which remain unanswered will be how fast the Hennessey Venom F5 roadster will be able to go. Hennessey is still trying to prove that its coupe model is capable of achieving what is published recently. A figure of 271 mph on a 3.2-mile runway in Florida.

Can It Take On the Bugatti?

The achieved feat is still short of what is yet to be achieved. But physics suggests that both Venom coupe and roadster may be able to break that milestone given they have more power and less weight than the Bugatti Chiron Super Sport 300+, viz. the current holder of fastest production car speed record of 305 mph. This feat was achieved by British sports car racing legend Andy Wallace in 2019. We will be looking forward what Hennessey is truly capable of.

As far as the price is concerned, F5 Venom Roadster is set to be more expensive than coupe, which costs around $2.1 million. If Hennessey manages to sold all 30 units, it will be less exclusive against just 24 units of coupe. Production of roadster set to begin by the end of this year.