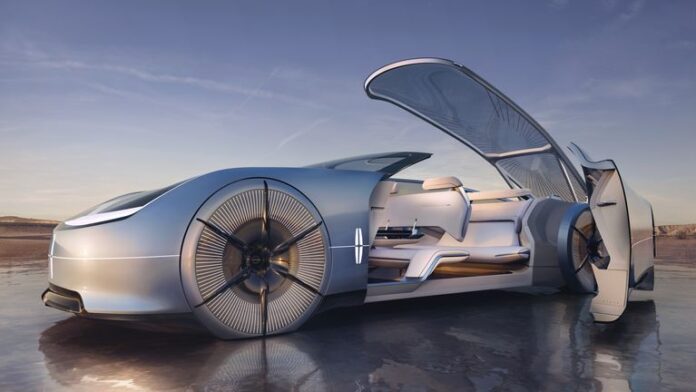 This year Lincoln will be celebrating its 100th or 105th anniversary, not confirmed properly. But its parent company Ford Motors prefers former one. Reason, Blue Oval purchased the brand from Henry Leland in June 1922. Later that year marked the foundation of Lincoln. In its earlier phase, Lincoln strictly produced aircrafts engines for US government. However, company started production of its first car viz. Model L in 1920. Maybe that’s the year Lincoln consider their founding. In that case, it means 2022 will be the 102nd anniversary. So now its time for Model L100 concept.

No matter whether it is 100th anniversary or any other, the American luxury brand will make this a special one. Company will be launching the Model L100 concept in honor of this occasion. This model shares its ethos with the formerly mentioned Model L.

The Model L100 mainly focuses on prioritizing personal luxury above all else, as likewise upcoming Cadillac Celestiq. But unlike the Celestiq which is a production model, the Model L100 is a pure concept. So, the functions and features like GT’s two rearward opening doors, as well as its glass canopy roof, are highly doubtable to be present. Nor do its autonomous driving capability can be seen going into production anytime soon.

Wherever, the Model L100 concept presents itself as a pure vision of Lincoln’s upcoming phase, and to some extent will be able to achieve. No pedals or steering wheel present. Instead, those within the car do the auto driving. Is there a need to override the Model L100’s autonomous driving?. In case of that, passengers can use a miniature model of the car that rests on a center-console screen to accelerate, stop, and steer the vehicle.

As the car is totally based on autonomous driving, Lincoln’s design team mainly focused on creating a cabin that will soothers the driver’s experience and take it to the next level. This includes a front seating space capable of switching between a forward-facing or backward-facing position. A massive floorboard-mounted screen helps set the cabin experience as well with the display projecting the likes of clouds to create a more serene setting.

The interior of the Model L100 aim towards a fantastical future whereas the exterior design is far more realistic. While, the features like 3D printed greyhound ornament and massive wheel covers provide a concept-car fancy, we think basic design of Model L100 could act as an influencer for the future Lincoln models. Lincoln’s design team abstained from fitting the Model L100 with overburden of decorative exterior pieces. Instead, Model L100’s body panels are free from unnecessary additions. A big Apple MacBook-inspired Lincoln badge on the car’s front end, and another Lincoln star on each front fender, reminds passersby what type of vehicle they’re looking at.

Befitting with futuristic concepts, the Model L100 concept fitted with a hub-mounted electric motor at each wheel, with power to those motors coming from a solid-state battery built in the structure. Although these batteries do not power any EV sold today, the future EVs will be depending on that in next few years.

It is unlike that many of the features of Lincoln Model L100 concept will arrive in near future. Nevertheless, we expect that its basic features could be the things to watch in upcoming Lincoln models. Who knows? Maybe L100 will inspire Lincoln to build more of a ultra-luxury vehicle in the future. Now maybe its the time for Lincoln to produce such a great model once again.