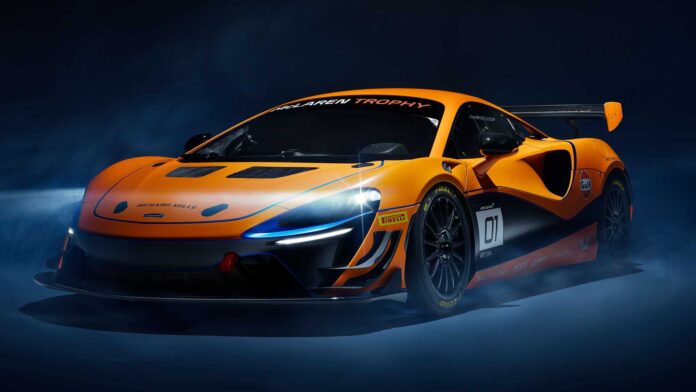 McLaren Artura Race Car is the upgraded version of the GT4-Class with less weight. While many of us dream to race for McLaren in Formula One or the IndyCar Series but won’t happen for most of us. But the 2023 McLaren Trophy Championship allows amateur racers to joyride one of the British brand’s machines on a track. To exaggerate with the launch of this chance, the new McLaren Artura Trophy race car debuts. (Source: Motor1)

This Artura Trophy is an evolved version of the GT4-class racer. The balance of power regulations doesn’t matter here, so McLaren tuned the engine to 577 hp. Unlike the road version, this car lacks hybrid assistance, and a revised exhaust makes the powerplant sound even better. The Artura Trophy weighs much less than the GT4 because the balance of power equipment is gone. The high-downforce rear wing helps it stick to the track. Owners of the McLaren Artura Trophy will be able to configure their car to GT4 specs by tweaking the engine management and changing the aerodynamic package. Opening doors to compete in other events for the customers.

Also Read: TVR Electric Sedan And SUV to Debut in 2024

While racing, each amateur will be accompanied by a professional racer. The rules will force the amateur to qualify the car and race before they’ll be allowed to hand the wheel to a professional. The McLaren Trophy Championship will support the GT World Challenge Europe in 2023. The rounds will be at Paul Ricard, Misano, Spa-Francorchamps, Hockenheim, and Barcelona and the competitors will have access to a concierge service for arranging things like hotels.

Also, the ones who own the existing 570S Trophy are eligible to take part in this new championship. Where these cars previously raced in the Pure McLaren GT Series. The road-legal 2022 Artura sports a twin-turbocharged 3.0L V6 with hybrid assistance pumping out 671 hp and 804 Nm of torque. It can reach 60 mph in 2.9 seconds, with a limited top speed of 205 mph.