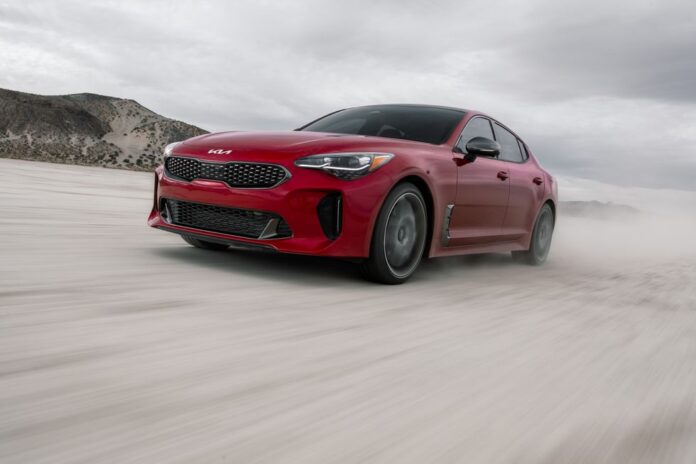 2022 Kia Stinger GT2 RWD is a great handling and powerful car. Kia Stinger shares its powertrain with the Genesis G70 sedan. It has impressive dynamics and upmarket looks just like the German rivals. Kia has come a long way since their American debut in 1992, and Kia Stinger is their flagship model.

The GT2 variant has a 3.3L twin-turbo V6 engine, producing 368 hp and 509 Nm of torque. The car just weighs 1723 Kgs, making it the same as European likes such as BMW 5 series. Will this powerhouse, the car can sprint from 0-60 mph in 4.4 seconds with a top speed of 167 mph. The exterior looks quite aggressive with designs such as the slick headlight housing featuring the greatest turn signals. The body has all-over clean lines which makes it look subtle.

The stance sits on 19-inch two-tone mag wheels and features Brembo Brakes behind that. The rear-end features the same grand touring design, along with a tiny fin spoiler. The rear diffuser is finished with a gloss-black tone, along with a  quad-tip dual exhaust. The interior is splattered with leather everywhere, all the seats offer heat and ventilation too. The dash and center console has accents of contrasting brushed aluminum, as well as a 10.25-inch touch screen with a plethora of technology.

The car also sounds great, as good as BMW or Mercedes sound like. The car is indeed quick and RWD sticks to the road nicely. This is a great package for a car that costs just a tad over $53,000.