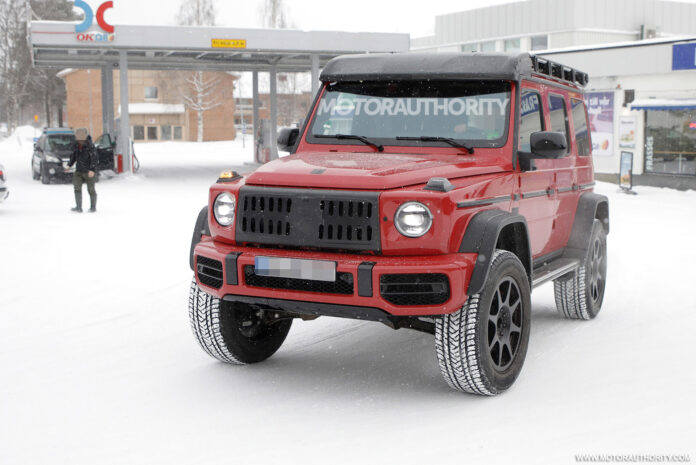 Mercedes G-Class 4×4 Squared is the biggest and highest ground clearance vehicle. This G-Class is an off-road-focused version of the facelifted G-Glass, which we expect will be powered by a V8 hybrid powertrain.

This is a replacement for the G-Class 4×4², which will make its debut in 2023, shortly after the facelifted standard SUV.

The spy shots show the 4×4² prototype testing in snow as it isn’t heavily covered in overly-heavy camouflage, which means we’re able to get a good look at the car’s styling and off-road upgrades. Showing off the G-Class familiar boxy styling, wide wheel arches and raised ride height

The car’s chassis is the same as the standard G Class, sporting the same updated front bumper and LED headlamps. However, we saw Mercedes has equipped it with a pack of off-road accessories, such as the roof rack with auxiliary lights, a spare tyre carrier for the rear door and a tough metal rear bumper.

This prototype has a much wider body stance and a taller ride height than the standard G-Class. The top-end model of the G-Class could be powered by Mercedes turbocharged 4.0-litre V8 engine, producing 216 hp as hinted by the side-exit exhausts on this prototype. This beast can go from 0-60 mph in just 7.3 seconds. And have a top speed of 155 mph which is truly insane.

Unlike the standard G-Class, the engine will be mated to a beefed-up version of the standard G-wagon’s nine-speed automatic gearbox and mechanical four-wheel-drive system.