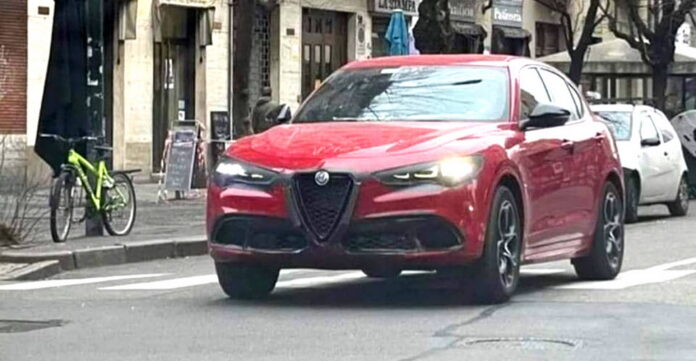 Facelift of the 2023 Alfa Romeo Stelvio was spotted on the streets completely undisguised with New Tonale styled Headlamps. The Stelvio to carry on a few years will likely get a much-needed facelift. Inspire from the Tonale, the graphics are updated with three matrix LED technology replacing the current bi-xenon headlamps. This looks aggressive with daytime running lights (DRL) similar to the Tonale.

The Alfa Romeo Stelvio, the brand’s first-production SUV debuted in 2016, revised in 2019 along with the Giulia sedan with improved tech although the exterior remained the same. The front bumper remains unchanged, although the air intake has been restyled. The side profile of the Stelvio can’t be seen in this initial image, but it is expected that a new set of 19 or 20-inch wheels and revised tail light graphics can be featured. Alfa Romeo Stelvio Facelift gets some amazing design looks which will make it ready to compete big challengers.

It is also unknown if the Stelvio will get any upgrades under the hood. The current engine features a turbocharged 2.0L four-cylinder and a 2.9L twin-turbo V6. As Alfa Romeo has pledged to become fully electric by 2027, There are no electrified engines of any sort available in the Stelvio. It is expected that 2023 Alfa Romeo Stelvio can go from 0-60 mph in just 5.3 seconds and have a top speed of 155 mph.

“Our strategy is to have either a new model launch or a significant product event each year until 2030 …. Next year we’ll hold a big event supporting the business.,” Alfa Romeo CEO Jean-Philippe Imparato told Automotive News Europe last month.

“It will be Alfa’s first full-electric vehicle, but it will also offer versions with combustion engines. We’ll launch our first electric-only vehicle in 2025. Starting that year all new models will be 100 per cent electric, worldwide,” he added, reaffirming the Alfa Romeo brand’s plan to switch its entire range to electric power by 2027.

These updates will keep the Stelvio fresh until their replacements arrive no earlier than 2027.